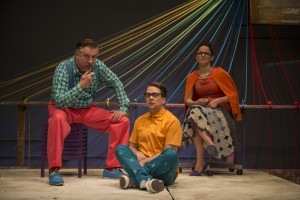 “The Grown-Up” is a magical, multi-headed creature, recognizable to anyone that has ever built turrets out of couch cushions or decided that their orange shag carpeting was actually deadly lava. It is a gorgeous fairy tale built out of nothing, instilling you with equal parts childlike wonder and ache of any adult caught up in the memory of a place that is forever out of your grasp. Playwright Jordan Harrison tells this bedtime story with more castor oil than you’d expect, being so accustomed to happy endings and easy answers. That’s the thing about fables, though, they are warm, familiar and comforting, the way life never is.

Ten-year-old Kai (Kevin Viol) tries to escape the tedium of playing hide-and-seek with his sister Anabel (Christina Gorman) by using the purportedly magical doorknob his Grandfather (Ben Werling) insists was once the eye of a ship’s prow maiden salvaged by a sailor (Bryan Bosque). It can take Kai anywhere, but there’s no guarantee of where he’ll go or if he’ll ever return. Kai takes the risk, of course, zipping headfirst through stages of his future life, chased stubbornly by his sister and the adversaries he outsmarts (Cruz Gonzalez-Cadel and Joseph Wiens), and met by his future lovers and friends. He adventures through mundanities: a career, a love life, and old age. The crystal doorknob takes him the only way anyone can go, further and further forward.

The ensemble members propel the story forward by narrating thoughts, action, and adorning a very sparse stage with their verbal set dressing. It’s the sort of necessary narration that makes up for every misused or long-winded stage narrator you’ve had to suffer through. And duties are shared to endlessly hilarious effect; take standout Cruz Gonzalez-Cadel for example, who steals every scene that’s not nailed down, beginning as Grandmother, shifting into Rosie, the former pageant queen, current Adderall addicted Hollywood executive assistant, then Paola, Kai’s elder care nurse.

It’s a joy to watch such an effective ensemble, doing such heavy lifting, and becoming the elements that add dimension to each lightly sketched world they inhabit. Each performer is a flash of color emerging when light bounces in prisms from our hero’s crystal doorknob, and we’re distracted enough with their wit and revelry to forget what lies behind the next door. Director Krissy Vanderwarker gives the story the spotlight, and wisely scrubs away anything unnecessary. And the story flies by at a break-neck pace, not pausing for a breath. When you see “The Grown-Up” (and you should), don’t blink; like life, if you blink, you’ll miss it.