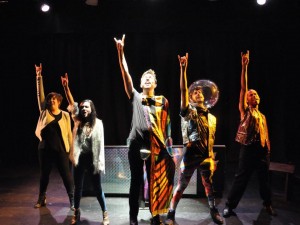 Accidentally, before seeing “ZIG: EDM Suicide” I’ve been a huge fan of MCL Chicago (a performance space and training center for musical improvisers) for a long time. Upon learning I’d be on the guest list for a homegrown, full-length musical from a roster of their enormously talented improvisers and musicians, I was as giddy as a kid at Christmas. How better to showcase the work of your best and brightest than to invite director Alex Richmond and composer Brad Kemp to step outside the scope of short sketches?  All that said, I think that “ZIG: EDM Suicide” could have a used a bit more time to bake before hitting the marquee.

World-renowned EDM artist, David Tom (Alex Garday), known onstage as ‘ZIG’, laments that he is an electronic music button-pusher and has not connected with his music or the army of smart-phone obsessed teens that comprise his fan base. His hero and name-sake, David Bowie, would surely be disappointed. He is urged by his record label manager, Labell (Katie Nixon) to take ever more potent drugs, and each brings about more powerful hallucinations as Tom OD’s. He is visited Christmas-Carol-style by three rock ‘n roll mentors. Space Jesus Neil Degrasse Tyson (Ed Selvey IV), Sarah from Labyrinth (Abby Vatterott) and Major Tom (Michael Shepherd Jordan) himself; not to mention their intergalactic backing band, The Wenus from Venus. The crew attempts to mold David into a more genuine, stable rock star.

Where “ZIG: EDM Suicide” delivers in spades, is in laughs. The cast has the rapport to sustain each loosely scripted scene, and finds a laugh in every flub or quiet space. Notable standout improvisers are Katie Nixon (Labell) and Michael Shepherd Jordan (Major Tom), who have both done great work in filling in their lightly sketched characters. However, this production has fallen prey to musical numbers and story elements that aren’t memorable or specific enough to keep us invested, nor do they tell us very much about the characters who sing them. While it is fun to say the name ‘Space Jesus Neil Degrasse Tyson’ over and over, there seems to be little reason that Jesus and Tyson were referenced, other than the absurdity of the names mashed together. In fact, Ed Selvey IV sings us the virtues of human touch in a funky number that is more reminiscent of Stevie Wonder or Rick James, than say, a deity or astrophysicist.

At its moral center, “ZIG: EDM Suicide” would fault the internet and over-connectivity for the downfall of rock, and looks to ZIG to finally deliver the music that will inspire teens to look up from their screens. But I’d argue that our relationship with our phones is more complex and no matter what, our rock appreciation can’t diminish as a result. And nothing kills the mood of funky power-house musical numbers, all geared at loosening our death-grips on our mobile devices, than the obligatory post-show “tweet about us or follow our page on Facebook”.

“ZIG: EDM Suicide” seems geared toward an easy-going improve crowd (it’s BYOB), and I hope that this show is just a first step toward more improvised musical productions.

TEN WORD SUMMARY: Strange Ch-ch-changes may be needed to salvage this interstellar musical.