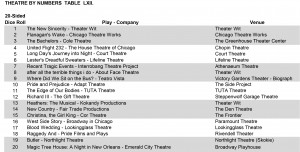 As I’m sure you know, there are a lot of projects that don’t get covered in the press.  Many of them are short one-night events.  Not unlike many other places, we have a standard that we follow with regards to reviewing.  For us a show must run at least 3 weeks total to get on our charts.  All of the shows on the chart to the right have runs that are at least that long.  Also, we limit ourselves to reviewing shows that are easily accessible via the CTA.  So, we seldom cover shows in the ‘burbs.  Those that we do cover are on the Green, Yellow, and Purple lines.  That limit isn’t imposed by many other ranches of the media, but then they have other limits that restrict who they may or may not cover in the outlying parts of Chicagoland.

I, for one, will not review children’s productions.  I don’t mean theatre for children.  That I will review.  I’m talking about productions done by young people who are basically still learning the trade.  I am not their instructor.  Feedback need not come from me.  A terrible review can be damaging to an adult who is used to being critiqued publicly.  To a young person still in their developmental years, that damage can be long lasting and permanent.  So, I don’t do it.

On the other hand, I do often cover companies that don’t get press elsewhere.  The little guys need love, too.

For this week’s preview, I want to focus on a few shows that are not on this week’s chart.  They aren’t on there for a variety of reasons.  One is nearing the end of its run and has fallen off the chart.  Another isn’t a long run thing (technically). 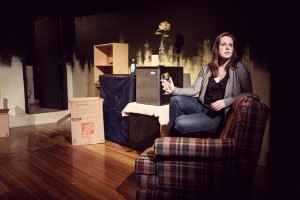 This show is one that my schedule wasn’t going to allow me to see, and now that it is approaching the end of its run, I am certain to not catch it.  This saddens me, because it is a production involving two people who I admire the heck out of.  First, let me speak about the company that is producing the show.  Broken Nose Theatre came on my radar a little while ago due to its first few shows at The Greenhouse Theater Center, which is where my own company made its Chicago debut back in 2010.  The folks who ran the company at that time were also on staff at the Greenhouse, and I liked them a lot.  In the recent past (read: last year or two) Spenser Davis took over the helm of the company, and it has been doing some really cool things.  I finally saw a show by them when I took in “My First Time”, which featured stories of people’s first sexual encounters.  That show was my introduction to Elise Spoerlein.  Davis was also part of that cast.  As was Jovan King (who was a regular member of my own company’s productions from 2011 – 2013).  Anyway… Since that production, I’ve been tracking the careers of Davis and Spoerlein.  I’ve produced short plays by Davis.  He’s done a staged reading for me.  He’s one of the truly great guys in this theatre community.  I haven’t yet gotten a chance to work with Spoerlein.  But, given what she brings to the table, I can’t wait to get the chance.  These two put their talents together and created “A Phase”.  Spoerlein did the writing, and she’s also the star of the show.  Davis directs.

This is a piece that knows its market well.  It is about a young woman on her own in Lakeview.  It takes her on a relatively stationary voyage through a phase in her life.  Here’s the thing that I like most about that.  As you may know, Chicago is a young person’s town when it comes to theatre.  There are a lot of early 20-somethings trying to figure out their lives and their careers.  In truth, there are a lot of first-time playwrights cranking out material about being stuck in what is essentially a quarter-life crisis.  And most of those plays suffer from searching too hard for the meaning of life as the leak onto the page from pens held by people who’ve yet to live life in any amount.  There is value in the saying, write what you know.  Spoerlein does just that.  And in the hands of a director like Davis, the piece has potential to speak directly to the people who are going through what the character does.

One other thing that I admire about Broken Nose is their dedication to strong women characters in their pieces.  They host a Bechdel festival regularly.  “A Phase” is another show that focuses on the female experience.  I really wish I could see it.

The show closes March 26th.  There are only a handful of performances left.  Click here for more information. 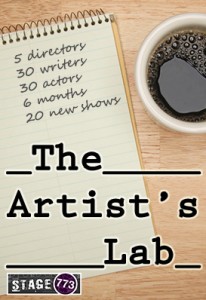 So, a few months ago, I was tapped to be a part of a project that involved a large group of writers, actors and directors coming together to create a bunch of new plays.  That project is hosted by Stage 773, and while I had to leave the project after contributing to one play (family health issues reign supreme over art).  Anyway, the thing is that I think the project itself is a tremendous thing that must be shared.  There are 5 pods (not sure why they are called that).  Each one is made up of a director, six writers and six actors.  Each group creates three new plays over the duration of the project.  So… I want to shine a light on two of the pods that excite me most.  I don’t honestly know what their pods are doing.  Mine was focused on creating one-act musicals on a theme about a Cowboy and a Showgirl.  But, what I do know is that the directors in charge of Pod 2 & Pod 4 are folks whose work excites me to no end.

M. William Panek’s next offering in on March 31st.  Panek directed one of my favorite shows of last year: “[title of show]” for Brown Paper Box Theatre.

Fin Coe is the Associate Artistic Director of Halcyon Theatre, and he’s also been a part of one of Commedia Beauregard’s Master Works projects.  I like Fin a lot.  His next offering is on April 14th.

Tickets to catch the new creations are only $10.  Assuming I don’t have rehearsal myself, I will be there on both of those nights.  I can’t wait!

More information can be obtained by clicking here.