Show: The Edge of Our Bodies

As we sat in the audience at TUTA’s performance space awaiting the start of “The Edge of Our Bodies”, my friend Tim mentioned that one of the things he likes most about their company aesthetic is that TUTA shows always feature design concepts that pull you immediately into the world of the play.  I have to heartily agree with that sentiment.  The set, created by Martin Andrew, combined with Keith Parham’s lighting design (which accomplished much with many small incandescent bulbs within wooden boxes), creates a unique world that we are forced to explore completely.  But then, we cannot, for our eyes blur.  About 18 inches in front of the audience, there is a shark-tooth scrim (a sheet of specially-woven black fabric which can be seen through when lighted from behind, but becomes opaque when lighted from the front).  The first half of this play is seen through that forced hazy filter.  It makes the world just a bit out of focus, and that fully supports the play itself in which much is unclear.

That lack of clarity is not unappreciated.  When it comes down to it, I think it’s part of the point.  Director Jacqueline Stone has delivered a production of Adam Rapp’s script that delves into the mind of a sixteen-year-old girl who is grasping at her maturing psyche and attempting to share it by thrusting it out into the open.

Now, I must point something out.  I have a sixteen-year-old daughter.  I spend a good amount of time around teenagers who are at this point in their lives.  I can say, with a significant amount of observational experience, that Rapp effectively captures the pinball-zinging pace of the thought process of today’s teens.  He creates a believable voice for Bernadette (Carolyn Molloy), the young woman who is the center of the world, whose blurred mind we peer into and witness as she takes a train from New England to New York City and whose insights are gathered into this script.  Molloy sometimes carries herself like the adult woman she actually is, but generally moves in a much younger way.  She shifts from a girl being what she is to one who is attempting to be what she may become.  It’s spot on for the behavior of the age.  She’s great. 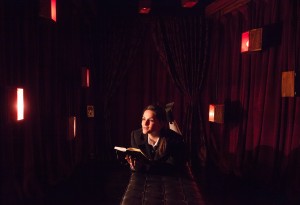 Bernadette is a girl who strives to be wise beyond her years.  She is an aspiring writer, so perhaps that makes sense.  She is also a girl who has made some major mistakes.  The whole journey upon which she travels is set in motion because she must inform her 19-year-old boyfriend in New York that she’s pregnant.  She makes the trip without having let him know she’s coming.  She’s skipping school.  She encounters a much older man at a bar and goes to a hotel room with him, role-playing a very dangerous situation. She takes risks constantly, and seems to not realize or care that each moment could be damaging to her future self.

So it is that our youth is spent in a confusing place.  Self-focused and not entirely present, while attempting to live in the moment.

I think that is where this production succeeds most.  It is a glimpse into a mind.  It is a character study.  The question is, do we want to spend a long time studying that mind?  After all, it is an unfinished one. But then, aren’t we all unfinished and incomplete? So, the play once again forces us into doing something that we might not otherwise want to do.  Sitting in the audience when the lights first let us see through the scrim into the dimly-lit space of what comes to represent a high schooler’s mind, we first notice the forced perspective of the angled walls that are like the receding lines that high school art teachers teach as a basic drawing skill.

The play forces us to confront the perspective of this girl at a time of great change in her life, mostly in order that we can reflect upon our own once we have emerged and escaped from her world and back into the one we normally inhabit.