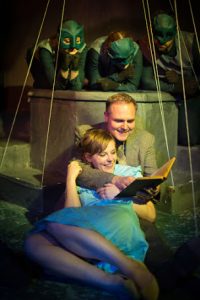 In a strangely compelling sequence of BoHo Theater’s “Eurydice”, the title character’s father has found his child in the land of tedium and nothingness he occupies and make good on his instinctual need to find them safety. He stumbles on a spool of thread and constructs them a shelter suspended on hooks, stones and rain boots. It’s not a home for them, but a sanctuary for the contraband they harbor: memories and ideas. The greatest threat in the countless re-imaginings of Orpheus and Eurydice’s underworld is forgetting. Numbness and ignorance are in the water that threatens to crest the neighboring Styx riverbanks.

This is where I have to be honest: I have a small bias that may compromise my ability to review objectively. I can’t get enough of “Orpheus and Eurydice”. It’s a powerful pulmonary artery out of which thousands of plays, operas, films and stories like Sarah Ruhl’s “Euridice” flow. And BoHo has crafted not just a compelling story, but an ornately minimalist work of art. 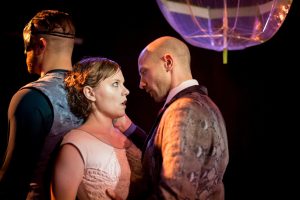 You consumers of popular Western mythos probably already know the drill; Orpheus (Chloe Dzielak), the world’s greatest musician, weds Eurydice (Amanda Jane Long), and within minutes, she is lured out of her mortal coil, and into the depths of hell. Orpheus rescues her by barging the gates to hell, playing the best song ever, and getting the okay from Lord of the Underword (Adam Kander) himself. There’s just one catch: he has to trust that Eurydice is  behind him, and never look back. Sounds simple enough, but it is a tragedy after all, made even more tragic in Sarah Ruhl’s look between page margins.

Ruhl introduces another figure, Eurydice’s Father (Peter Robel), who has retained his faculties, despite a memory wiping dip in the river Styx. Where the myth is more concerned with Orpheus’ rescue, “Eurydice” follows the title character through death and a second childhood in the darkest of places. 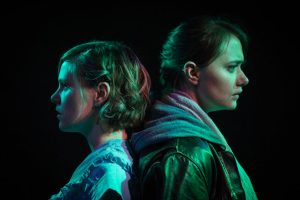 The additional story layers enrich the myth with character and substance. We see Adam Kander’s terrific Lord of the Underworld not only as what we expect, a sleek predator, but also as a tempestuous overgrown child ready to spite anyone who doesn’t dote on him. We see Amanda Jane Long and Peter Robel, a reunited father and daughter, comforting each other in their grey prison, finding glimpses of happiness in their misery. They retrace the steps of Eurydice’s childhood, until she can remember what the river took away. And in a very appropriate gender-blind turn, Chloe Dzielak carries on as a weary Orpheus, judged by every man in authority as too slight and weak in the shoulders to care for Eurydice.

Director Charles Riffenburg aligns this production to embrace strange angles and human body formations. Those of us in the audience are so close to the action that it can feel uncomfortably inclusive. If we are not complicit in every characters’ mistakes and hardships, then we are at least confined, right alongside them in a grey, industrial underworld. “Eurydice” succeeds in inviting us in for love and loss that strikes very close, not just in proximity, but in familiarity; characters speak our language and feel heartbreaks just like ours.

TEN WORD SUMMARY: New world discovered in the footnotes of a timeless story.