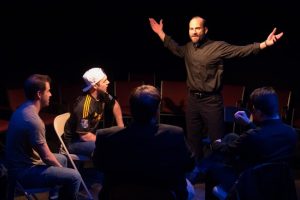 It’s important to admit it when you’ve made an egregious error, when you’ve done a disservice to the people around you. And so, it is in that spirit, that I have to beg your forgiveness. I assumed that a show focused primarily on small penis size wouldn’t have much to say to me a card-carrying feminist, but Level 11 Theatre’s production of “The Irish Curse” has proven me wrong on all counts. It’s an incredibly funny and crass journey that takes an honest glimpse into the pants and hearts of a group of greatly troubled men.

“The Irish Curse” may begin the same way a good limerick does- with ridiculous genitals- but it has legitimacy at its core. We may be laughing, and our laughter may be welcomed by author Martin Casella and director Justin Baldwin, but they’re also betting that the body dysmorphia, emotional stunting and ridicule these men suffer will strike a chord in all of us.

Four relatively affluent and successful New York men gather in a church basement to hold a weekly gripe session and welcome a new member, Kieran (Dennis Bisto) to their Irish brotherhood of the considerably poorly endowed. We meet Rick (Logan Hulick), a well behaved college student, masquerading as a lady killer. There’s also Stephen (Neil O’Callaghan), perhaps the gruffest gay cop in all of the NYPD, and Joseph (Rob Grabowski) a recent divorcee who can’t bring himself to date. They’re corralled by Father Kevin (James Bould) whose pious paint has begun to peel after years of dutiful silence. They’ve just come together to bitch about their unfortunate penile shortcomings to a familiar and discreet audience, but newcomer Kieran inspires a deluge of honesty among the brotherhood. More than anything, “guys are really screwed up about the size of their dicks.” 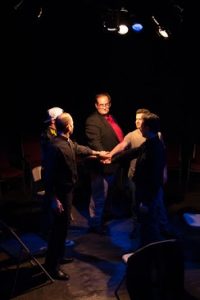 In other hands, the ritual of an evening of church-sponsored therapy would threaten to get tedious, but director Justin Baldwin lets each man dictate his moment at the center of the circle. Rob Grabowski as Joseph shakes the brotherhood awake with his booming manifesto equating every political/historical conflict to a dick measuring contest. Neil O’Callaghan spits and fumes as Stephen, who speaks with an arrogant authority, giving a roomful of men their first taste of what it feels like to be mansplained. James Bould wields the same kind of power in his deliberately soft-spoken demeanor, imbuing Father Kevin with a reluctance to ever be fully seen or heard.  Logan Hulick’s Rick is more empathetic and understanding than he hopes the brotherhood will catch on and, I don’t know how he does it, but Dennis Bisto maintains an unrelentingly sweat-soaked, ‘nervous enough to vomit’ countenance as Kieran.

Altogether, this little show packs a decent sized wallop. But hey, Level 11 Theatre, don’t think because you’ve won over one feminist reviewer that this lets you off the hook. “The Irish Curse” still administers a heaping dose of what Chicago theater already has plenty of: the white male perspective. No matter what, I’ll always advocate for more plays and roles for women and people of color.

TEN WORD SUMMARY: Sir, can I interest you in some theatrical male enhancement?