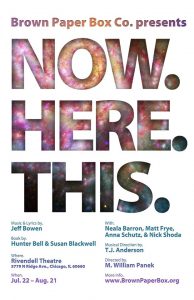 No matter how objective a critic tries to be, one does have one’s favorites.  A little theatre company called Brown Paper Box Co. is one of mine.  They consistently produce shows that are sharply directed, with solid production values despite their obviously smaller budgets.  They get good people to work with them, and they are committed to putting up worthwhile theatre. I like them.  Last year, Brown Paper Box Co. was responsible for one of my top 5 shows of the year.

So, when I saw that I would be taking in their newest production, that said production would include 3 of the 4 cast members of last year’s “[title of show]”, and that it would be a show by the same creative team as that stellar work from the year before, I was excited.

Now, it seems somewhat unfair to compare one production directly to another, for they are separate pieces of art.  And, there is nowhere within the script or the publicity materials that the two plays should be seen as being directly related.  But, the four characters are the same.  They are clearly the same autobiographical representations of the four people who originated “[title of show]”.  In fact, unlike that first piece, one of the women is even credited as one of the writers of “Now. Here. This.”

I’ll do my best from here on out to write only about the show that I saw this go-’round.  But, know in advance that I will fail at that endeavor.  That is largely because this play is essentially a prequel/sequel of sorts.  This play is the answer to the unasked question of ‘How did the characters in “[title of show]” become who they are?’

The conceit of this show is that Jeff–I’m sorry… Man 1–has gathered his friends to go to the Museum of Natural History with him.  Several vignettes are seen within the confines of the hallowed halls of the museum, which then trigger flashbacks or philosophical examinations of self.  Each of these is accomplished in song.  If I break it down to its most simple, this isn’t a play (as it lacks plot).  It is a song cycle with a relatively flimsy framing device.

Had I never seen last year’s show, I would have been basically just unimpressed with the tale and wondered why I should care about these people in a situation that has nothing at stake.  Instead, because I’d met these characters before and I fell in love with them the first time, I was all the more disappointed.  Clearly, I am meant to care about these people, and I do, but only because I’ve met them in a previous work.  But I care about them in the way that a parent still cares for a child with whom they’ve recently become very disappointed.  I still love them, but I’m not terribly proud of their recent actions.

Now, I must take a moment to point out that I’m talking about the characters within the play in the paragraph above.  The actors did a phenomenal job with the material they were given.

Susan (I’m sorry… Woman 1), played by Neala Barron, has the best scenes and carries the show.  Her contributions to the work are clearly the strongest.  And Barron continues to be one of my favorite voices on the Chicago stage over the past two years.  Matt Frye (Hunter…I mean Man 2) does an admirable turn as the more random of the two men who write musicals together.  And Anna Schutz (Woman 2, who will otherwise be known as Heidi) brings a fun energy to the character of a successful NYC actress.

And director M. William Panek clearly made the most out of what was on the page.  But, the script itself gave no reason to embrace these people in this time and space.  The group putting on the show do a great deal of good work.  They are merely hampered by a script that doesn’t have a driving through line.  They are held back by songs that don’t stick in the memory once the final notes ring out, let alone after you’ve left the building.  Their wings are clipped by a concept that never fully develops.

Sometimes, after a really good story, the reader (or the audience) asks about what happens next.  And sometimes a sequel is written to tell the further tale.  And sometimes the end is left as the end, wherein the reader has to imagine the future for themselves.  Almost universally, when a good story is told, there is no one asking to be told the particulars of what had gone before.

In the final scene, a philosophic pondering results in our receiving the wisdom contained within the title, and we wonder if we had to sit through the rest in order to reach this pearl of existential thought, and if so, why?

TEN WORD SUMMARY: This is a prequel nobody ever asked for or wanted.