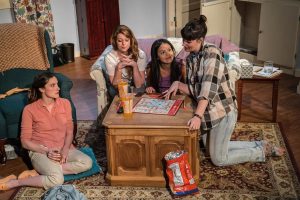 At first glance, Colette Freedman’s play “Sister Cities” seems to be the perfect offering from a company such as Chimera Ensemble which is “dedicated to being storytellers that explore human behavior” (according to the About Chimera Ensemble section of their press kit).  This play is a close look at the interactions of five women, four of whom are sisters–the remaining woman, their mother.  Mary (the mother, played by Chimera’s artistic director Rainee Denham) is dying or is dead, depending on which part of the play is being witnessed at the time.  Her daughters have assembled in the aftermath of Mary’s death to hold a wake of sorts and to deal with the details that surround the apparent suicide of a family member. 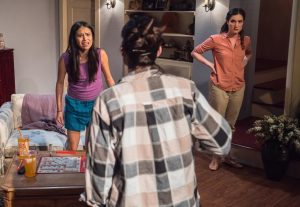 Accusations, love, hate, and grief all fly about the scene as one might expect, especially once it is made clear that Austin (Nicole Fabbri) has assisted in Mary’s suicide.  Austin is the second oldest daughter, and the one who came back home to be with her mother during her struggle with ALS.  This play is full of potentially heavy and intense topics and moments.  With the right nuances it can be very powerful.  Sadly, director Ashley Neal’s cast often missed the nuances that would have made this play a brilliant study of human behavior.  In attempting to delve deeply into the behaviors and relationships of women in a time of family crisis, the production has only succeeded in showing a surface level awkwardness that is present in most real-life interactions.  You know, the ones you would never consider putting on stage because they are just real enough to be painful to watch.

I really want to like this play.  It’s an attempt to explore some heavy issues and topics: assisted suicide, hereditary illnesses, nature v. nurture, birth order politics, the importance of chosen family, the affects of ALS on a person and their kin, the differences between legality and morality, and how we deal with grief.  The problem is that by listing them out just as I did, I came close to how effectively the play touches on each as well.  We receive a cursory glossing of the issues at hand, but never a real exploration of any of them.  Freedman’s script takes a buckshot approach to hitting as many of the targets as possible.  She doesn’t make a direct hit on any of them.  What I find missing is the answer to the question, what is at stake here?  It seems to me that what is at stake is Austin’s need to be understood and forgiven by her siblings for having guided her mother’s hands in slitting her wrists.  However, if that is the case, then the show could have been directed differently to focus on that through-line.  If that isn’t crux of the play, then it really is unclear what it could otherwise be.  Perhaps that has to be found between the lines.  If so, then the playwright has placed an unfair burden upon the producing company to improve her work to a level that it shines.

No matter wherein lies the flaw, the play suffers from a disconnect between the seriousness of its myriad topics and the intensity of focus laid upon them.  I came away from the play thinking about the issues within the play, but still somehow not having any emotional investment in what I’d just seen.  I hunger for an empathetic link to the material that brings me into closer contact with moments of intense human behavior.

TEN WORD SUMMARY: Did these four sisters grow up together? Doesn’t seem so.