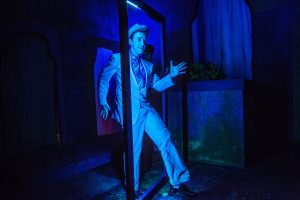 Roll the premise of  Black Button Eyes Productions’ “Amour” around it your head for a bit,  and it’ll start to sound like a 1940’s French superhero origin story. It’s bestowed with some biting humor and a circus of oddballs, but this musical has some trouble living up to it’s own potential.

“Amour” is a musical based on a 1943 French short story, “Le Passe Muraille”, roughly, the man who could walk through walls. In “Amour” we follow sad-sack office worker Dusoleil (Brian Fimoff) as he avoids his shirking co-workers and pines after beautiful, unhappily married Isabelle (Emily Goldberg), who is held captive in her own home by a jealous husband. In a blackout, Dusoleil discovers he’s developed the ability to walk through walls, which allows him to pilfer from the rich and bestow gifts on downtrodden workers in the Monmartre square he inhabits. His deeds for local artists (Tommy Thurston), news vendors (Scott Gryder) and whores (Missy Wise) earn him a new moniker, Monsieur Passepartout (It’s really fun to say,  and translates roughly to Mr. Master Key). However, he cannot get any closer to Isabelle without provoking her dubious husband (Greg Zawada). The question you’ve probably already guessed the answer to, is if the power of molecular displacement will get Dusoleil the girl and the life he desires.

Brian Fimoff and Emily Goldberg are vocal powerhouses as Dusoleil and Isabelle, doing the heavy emotional lifting as their cast mates flit by with quips and costume changes. It’s especially fun to watch Fimoff transform Dusoleil from lonesome curmudgeon to beaming adventurer, and Goldberg’s rendition of Isabelle’s song “Other People’s Stories” (in which she compares her life to a gossip magazine) gives the character more substance than the authors do. Other wonderful and ridiculous turns come from Missy Wise as a popular Monmartre whore who longs for the war-time appreciation she used to get. Likewise, Scott Gryder turns everyone to putty when he delivers a riotous jolt of energy by turning in his newsboy cap for the powdered wig of novice Barrister. 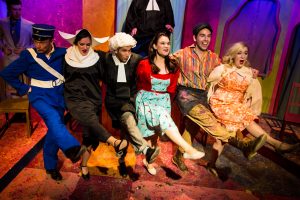 The problem? It isn’t the performers, who treat us to inspired vocal acrobatics and fantastic lyrical nuance. And it isn’t the music by  Didier Van Cauwelaert and Michel Legrand, who boast a song list that is sweet, funny and just the teeniest bit self-aware (during the “Street Vendors’ Waltz” they lament in song about hum-drum choruses they are forced to repeat). The problem comes from “Amour”’s paper-thin premise, and incredibly thinly sketched characters whose development is far less important than the witty lyrics they must be in place to spout. “Amour” is bursting with cleverness, but deep into act two, it sputters into tedium when the story runs out of tension and action to support it.

When a new show based on dated source material emerges, there’s a question every author/adapter should ask: Why is this story relevant now? There’s nothing wrong with endeavoring to rescue a popular public domain story and spruce it up for a new audience. But with “Amour”, the piece seems content to serve up unhealthy gender stereotypes and decrepit story tropes. When female characters sing together, but still can’t pass the Bechtel test, it’s more than a lyrical issue. When your production’s lead female role, Isabelle, takes on such ‘object’ status she may as well be a coveted houseplant, it’s more than a script problem. When her chief characteristic is ‘being lovely’, your words do a disservice to every woman in your audience, especially young women.

What “Amour” has in spades is whimsy and humor, and I don’t doubt it’s that sensibility that won over director Ed Rutherford and the Black Button Eyes production team, but I hope future productions have the substance and relevance that can truly feed a conscientious audience.