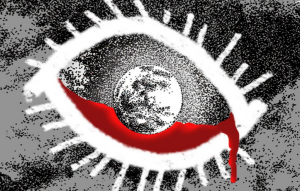 Macbeth the Scottish and “Macbeth” the Scottish play bear a tricky relationship to one another. Macbeth the king was a historical figure, but Macbeth the lead of Shakespeare’s tragedy deals with far too many witches and witchy prophecies to match the factual record. Throw in the fact that sixteen generations of actors — according to director Georges Bigot — have now played Macbeth, and the truth of his life and death gets even fuzzier.

Which is perhaps the way Theatre Y prefers its Macbeth, in their production currently running in the basement of the Chopin Theatre. Anchored by Bigot and an ensemble that rehearsed the play for a year, and only cast roles three-quarters of the way through that process, this “Macbeth” is beautifully painted but still impenetrable. But that is not due to lack of effort and visual panache; it is due to lack of textual dexterity. The ensemble tries to draw parallels between our time and Macbeth’s tale of ambition and existential crises, but the resonance vanishes once it becomes clear some of the actors do not know what they are saying, and that still images and lip-syncing outweighed examination of the text.

For those who have never had the pleasure of reading or seeing “Macbeth,” here is the basic plot outline: our protagonist is a Scottish thane (Brendan Mulhem) who runs into three witches (Kevlyn Hayes, Jackie Richards, and Laurie Roberts). They tell him he is fated to be king of Scotland, and that his friend Banquo (Cody Beyer) is fated to sire kings. Spurred on by this prophesy, Macbeth and his more opportunistic wife (Katie Stimpson) murder the current king Duncan (Arch Harmon). Heir to the throne Malcolm (Hector Alvarez) flees the country, and only vows to return and regain his crown once the warrior Macduff (Jerome Hicks) stands by his side. Meanwhile, Macbeth arranges the murder of many more people, in order to ensure his new title.

This is a play of immense uncertainty. Why do the witches appear to tell Macbeth about his future? Would he still become king if he didn’t murder his way into the position? Why is Lady Macbeth so steely before their crime, and what makes her unravel entirely after its completion? Can truth ever be discerned, when men are able to smile in spite of their malicious actions? Even the language of the play is confounding: “which is which;” “So foul and fair a day I have not seen;” the Porter’s speech on equivocation doesn’t resolve itself so much as peter out. People hear and see things, but the audience can never be sure if birds are crying, or if the Macbeths are jumping at shadows.

Bigot’s best work as a director comes in moments where characters fight the intangible. He is wise to have Macbeth grasp at a knife that does not exist, and then to have Mulhem whirl around the stage to keep from getting cut by his invisible foe. Likewise, the parade of kings that Macbeth sees under the tutelage of the witches happens in his mind’s eye, which allows the audience to take heed of his growing paranoia and psychosis. Moments such as these make for a hallucinatory experience. The audience is Macbeth’s ally throughout; he speaks to us more than anyone except his wife. But he also sees what we cannot, thus proving there is uncertainty in our relationship. Is Macbeth inspired by false prophecy? Is he mad? Or is he seeing true events that will come to pass? We can never know.

This production falters in its grander visual elements. The witches lipsync a Diamonds’ song early on in the play, and Lady Macbeth drags her fingers across a curtain sinsterly, all before performing a dance of her own and reading about Macbeth’s possible future. At other moments, she and Macbeth smile robotically while entertaining guests. Some of these flourishes underline the false faces of the characters, but more often, the sights and sounds put Macbeth in inverted commas. We are watching a production of “’Macbeth,’” not your run of the mill “Macbeth.” But the spectacle rarely informs the audience. Rather it draws the play out to a two hour forty-five minute run time that taxed my good will as an audience member. I also sense that visuals took precedence over looking at the thesis and antithesis in the verse. Rarely have I understood so little of what actors were saying in a Shakespeare play.

I should single out the performances that imbue the play with high stakes and deep meaning. Beyer as Banquo is recognizably human, and his command of poetry helps the audience see the rock and hard place he is stuck between as Macbeth’s rival. Hayes is remarkable as Lady Macduff late in the play. She does not overplay her grief or underplay the danger she is in; she focuses on her son, and her death sticks with the audience once she is gone. Mulhem has a great voice, but his increasingly erratic Macbeth made it hard to follow his thought patterns, especially in the “sound and fury” soliloquy. Stimpson located an intriguing fear in Lady Macbeth early on that vanished before her death, and I was sad to see her insecurity go unexplored.

Michael Rathbun’s light design gave the performance a lurid sheen. His use of low-placed lights to highlight internal monologue gave the actors a stark look, and his use of reds and purples during the banquet and murder scenes sold the carnage in the Chopin’s intimate space. KG Price’s sound editing provides jaunty themes for the characters, and the peppy music lends a creepy vibe to the whole play. The costumes by Branimira Ivanova set the play in a distinctly Kennedy Camelot-setting once action moved back to Dunsinane, an interesting contrast to the contemporary army fatigues that pepper the battlefield scenes.

This play may not be for everyone. If you are in the mood for a sight-heavy “Macbeth,” this production is your best bet. If you are looking for a clear examination of the play’s dark center, you might be better off reading the text on your own.