Company: Nothing Without A Company & The Living Canvas

Every once in a while I see a show that redefines a part of the art of theatre.  Once in a great while.  Over the years I’ve pretty much solidified what I see as a good show.  And the guideposts that have been set along the way are the ideals that I use when writing for this outlet or any other about what I’ve seen.  But, then something like “[Trans]formation” comes along.  The show, which is now playing at Collaboraction Studios under the dual flag of Nothing Without a Company and The Living Canvas, takes on the heavy task of redefining language and interpersonal relationships, self-identity and how we look at others.

This production has clearly been carefully crafted by director Gaby Labotka and her collaborators.  It is a devised work that stems from a series of submissions from trans individuals from around the country.  The source material is available in a zine that is offered up at the performance. I highly recommend getting a copy as part of the experience.

So, I’ve said that this thing shifted my idea of theatre.  Why is that?  Well, for one, the piece is essentially what I would have called performance art in the past.  Much of the show has no plot, nor characters. Yet it is clearly theatrical. It is constructed around a theme and presented by way of images.  Sometimes these are literal images projected upon a screen, but more often the images are created through a brilliant collage of stage-wide projected textures that are caught upon the myriad surfaces of the stage, and more importantly upon the varied shape of the bodies of the performers.

Part of any production by The Living Canvas involves the actors performing nude, and this is performance is no different.  The images and their interplay upon the bodies of the actors is like a vibrant and vital painting that is constantly shifting before your eyes.  Though the performers don no clothing, this is not a bit of gimmick for attracting more eyes and titillating the senses.  This is a literal baring of one’s body and metaphorically the soul as well. 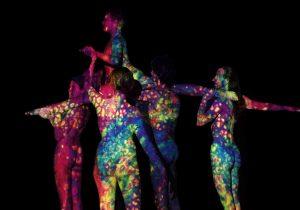 I have never been to a production of The Living Canvas before, so I can’t comment on how appropriate it seems in other productions, but with the topic of gender identity, the human body seems perfectly suited as the tool to tell tales.  As I sat and watched the six performers on stage, there were often times that their nudity was completely lost among the rest of the presentation.

Through short monologues and songs, physical pieces and proclamations, this piece finds a way to speak to each viewer and touch them deeply.  There are multiple levels of truth constantly being put forth and taken in.  You’ll note that I don’t make special mention of any specific performer in this review.  The reason for this is two-fold.  First, I don’t believe that any one individual within this work can be held separate from the others.  I’ve never seen another show in which the meaning of ensemble is better represented.  Second, nothing I saw can be subject to the standard criticisms I might address in a review.  I can’t honestly tell you if these performers are good actors when it comes to a regular play.  But, I can tell you that they are perfect for this piece.  The sum total of their work here is something brilliant and wonderful.  It challenges the audience.  It informs the audience.  It changes the audience.  That’s what this art is supposed to do, and they do it better than I’ve seen in a long, long time.

TEN WORD SUMMARY:  Gender is not defined by genitalia despite actors being naked.