For the last ten years or so, there has been a spotlight on the mysterious disappearance of honey bees in America, and across the planet.  So, it isn’t at all surprising that plays have now been written about Colony Collapse Disorder (CCD).  I’ve reviewed one other play about the topic a couple of years ago.  This second go-’round with the topic is similar to my last, in that both works are less about the bees than about the relationships of the humans on the stage.  Madhuri Shekar’s “Queen” looks at the interactions between two women who are researching the issue of CCD.  Shekar doesn’t try to draw comparisons between the lives of the bees and the humans investigating them.  That’s a relief.  When it comes down to it, the social structures forced upon those who live within academia are nothing like the shared communal intellect of a beehive.  Shekar’s characters are solid representations of scientists in the high-pressure final stage of getting a study published in a peer-reviewed journal.

Ariel Spiegel (Darci Nalepa) and Sanam Shah (Priya Mohanty) are two PhD candidates at a school that is part of the University of California system (in real life, UC-Davis is one of the leading sites of research into CCD).  The ladies are good friends, in addition to being partners on a study that is set to be published in the journal “Nature”.  They are simply one batch of data away from making their careers go gangbusters.  A problem arises when the newest data doesn’t match their earlier projections, and the validity of their whole study is called into question. 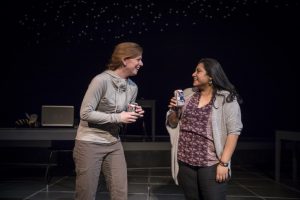 The women are pressured by their advising professor (played by the dynamic Stephen Spencer) into fudging the numbers so that publication can go forward.  And, Sanam encounters a potential love interest whose opposing views on most of her beliefs shakes the foundations upon which her work rests.  Adam Poss’s turn as Arvind Patel, the suave, over-sexed, greed-driven match found for Sanam by her parents, is one of the most entertaining parts of the show.  Arvind is not a terribly redeemable character, but he is strangely likable to both the audience and Sanam.

In most moments of this play, there is an intimacy and an urgency that can draw in people who know nothing about science generally, or the bee problem specifically.  One need not know anything about science and how it is pursued in order to identify with the two women who are struggling within their own lives with the day-to-day stressors that make all of our lives complicated.  I think this is wherein Shekar’s script most succeeds.  Friends support each other, until the crucial moment when they don’t.  Fights get personal, and healing is difficult.  This is the messiness of being human told in a tale of people who are often seen as distant and clinical in their interactions with others.

Director Joanie Schultz brings out both the common preconception of scientists (socially awkward, logical rather than emotional beings) and the truly passionate side of real life scientists who truly believe in what they are doing and the people whom they are doing them with.  I struggled with the first scene of the play as it is seen at Victory Gardens because Nalepa and Mohanty stand awkwardly together and have what is essentially a very awkward presentational chat which serves as the play’s exposition.  They have this chat with beers in hand, so we’re supposed to see them as friendly to each other and having a casual chat at a conference.  It is a scene that doesn’t immediately draw you into liking the characters, nor understanding that they are close friends and have been for years.  But, as was recently explained to me by my wife (who is a scientist–a chemist, to be precise), that’s basically what socializing at a conference is like.  So, now after the fact, I give the first scene a bit of a pass, though while watching the show, I was relieved that the production improved greatly after a rough start.