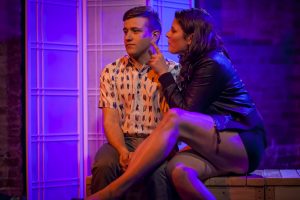 There are certain things that one looks for in a major Broadway musical or a show at the Goodman that one doesn’t expect from a small theatre in a tiny black box setting.  In fact, the storefront theatre scene creates a very different hunk of art than does the loop theatre district.  This isn’t really a headline of any sort.  Anyone who has taken in a show or two in Chicago knows how it is.  But, if you don’t take in storefront musicals often, perhaps you’ll allow me to take a moment to contemplate what makes the perfect storefront musical experience…

For me, a perfect storefront musical must begin with an admission to oneself that expectations are not high.  I see 10 to 20 new musicals a year and most of them are in tiny venues by people who are earnest, but not experienced makers of musical art.  And, because of this, I know that in most instances I’m going to leave in what amounts to a listener’s walk of shame, head slung low wondering how I’ll forget what just came to pass (and normally, once I’ve written my review of said show, it does leave my brain quickly).  However, there are a few shows that were so remarkably bad that the damage sticks with me years later.  So, when the music starts and the first number gets rolling, there has to be that moment when a singer hits a sour note, or an errant step makes the choreography look wrong.  That single moment is the set-up for the perfect storefront musical.  That flaw allows the reviewer/audience to think that they are once again in for a stinker, only to then have the whole ship righted and the production to rise well above their anticipated quality. 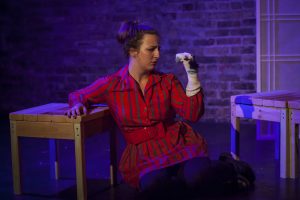 In “Musical Therapy”, Death & Pretzels presents an evening that isn’t perfect, but which does offer up the perfect storefront musical theatre experience.  The harmonies in composer Joey Katsiroubas’s first number are a little roughly rendered by the five actors who first grace the stage.  Dan Hass’s book staggers into the first spoken scene like a timid and gawky teen.  Awkwardness abounds.  Then, after about five minutes, the show hits its stride and its comfort zone, and it never looks back.  Hass’s script is funny, and intelligent.  Karsiroubas’s songs are memorable to the point that I’ve currently got one of them stuck in my head as I write this.  The show’s structure is familiar, but quirky in a way that both reinforces what we want in a musical, but also pokes fun at what can be a a too tired trope at times.  It is refreshingly tongue-in-cheek while simultaneously honest and true to itself.

At the heart of this production is a tale about a couples therapist, Theresa (Haley Mozer), who is unlucky in love herself.  She is in lust with the guy (Ethan Peterson) who’s just moved into the office next door to hers.  And she longs to get with him. Most of the show takes place in Theresa’s therapy sessions with two couples.  Ryder (Matt Lamson) and Liz (Emma Palizza) suffer from a lack of sexual chemistry (largely because she’s secretly a lesbian). Timothy (Sean Cameron) and Darcie (Erika Hakmiller) are addressing some control issues (hers over him). Each session contains a catchy number in which the relationship is explained, and then a time buzzes and the session is over.  Theresa discovers that Will (Peterson) has a girlfriend, and she schemes to use her practice to tear them apart, while also reshuffling the romantic deck for all of her clients.  Hilarity ensues. 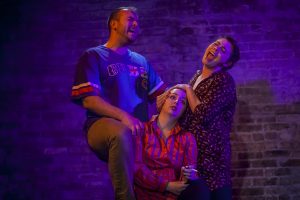 Director Madison Smith guides the cast through what could be cliche situations with a deft sense of comedy, elevating the show’s potentially silly moments to something better.  Smith’s efforts are helped along by the choreography of Brian Boller.  None of the dancing is too technically demanding, but it fits the mood of the piece perfectly, and establishes that the show’s laughs will come from physical sources as well as script-based chuckles.

My one gripe with the show is that there is only a 5-minute intermission.  In this day and age of short shows with no intermission, I wouldn’t have minded if the break were outright eliminated, but if it is necessary, a slightly longer lull in the action would be good so that drinks may be procured and bathrooms visited.  I understand that Gorilla Tango runs a tight ship when it comes to scheduling multiple shows on the same stage each night, but the 5-minute interlude doesn’t serve a positive purpose for anyone.

Gorilla Tango can be a very limiting space in which to put up a production, and it’s probably the last place I would think to put up a musical, but I can safely say that “Musical Therapy” is worth casting aside any trepidation or otherwise negative expectations regarding the venue and/or storefront musicals in general.  It is a good evening well spent, a fun time, and a show that fits its environs perfectly, treating its topic both viciously and lovingly.  Death & Pretzels has created a show that succeeds at being exactly what is and what it should be.

TEN WORD SUMMARY: Sock puppets and sex and singing and dancing and wow.