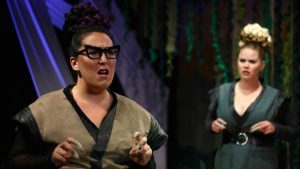 If someone had walked up to me and told me there was a show out there that re-imagined “Jurassic Park” from the perspective of the dinosaurs, there is no way that I would have guessed it to have been anything like what the folks at Circle Theatre have put up at the Heartland Studio.  On the surface the play is a parody that places its footing firmly upon the “Life will find a way” statement from the 1992 movie that explains a hatched brood of dino eggs from a supposedly all-female population of prehistoric creatures.  Had the show stopped right there conceptually, added a handful of songs about eating goats and humans, and the like, and this would have been a fun, light romp.  But the script by Marshall Pailet, Bryce Norbitz, and Steve Wargo is far more sophisticated than that, and the audience is treated to a thoroughly enjoyable romp that is still quite fun, but not always so light. 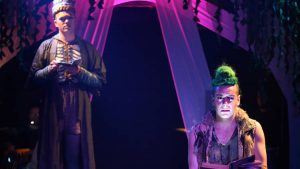 Each time I enter the tiny Heartland Studio, I instantly look to see how the producing theatre company chose to deal with the remarkably restrictive confines.  Over the last few years I’ve seen some abysmal wastes of space, and a few reasonably successful and creative ways of making the space work.  But, I have never been as impressed previously as I am with Jimmy Jagos’s set.  The design extends into the lobby, as well as up the walls into the audience.  And the mobile set pieces that first confront the audience hearken directly back to the sense of awe one feels upon the first viewing of the gates into Jurassic Park.

With the mood set, there’s a bit of time for some absurd fun prior to the more serious content of the show, as so we meet our narrator, a woman (Caitlin Boho) who claims to be Morgan Freeman.  In that character, the tone of the evening is set.  The fourth wall is broken, the cabaret nature of the show is established, and the premise of the show is explained.  Life must find a way, despite the fact that all the dinos are females.  Now, it might be noted here that not all of the actors are female.  This helps a bit with the harmonies of the songs, but it also makes for a fluid gender-scape from the get-go.  When, partway through the play, a T-Rex suddenly sprouts a penis, it naturally does so on an actress-portrayed dinosaur.  Of note, the two dinosaurs who morph into male specimens are both played by women.  The female dinosaurs played by men remain female.  Some of the humor grows out of the sexual and romantic relationships that grow out of the gender changes, and some of it is pretty low-brow, but it is skillfully offset by other bits of commentary-based comedy that takes a hard look at the battle between science and religion.

These dinosaurs aren’t just ravaging reptilian monsters.  They are members of a well defined, if somewhat naive, society with a church-like organization at its core.  And the religion seems to have grown out of the population’s circumstances in an understandable manner.  We witness crises of faith, confrontations with new information, and the struggles of leaders and followers in their dynamic relationships.

The Velociraptor of Faith (Jacob Richard Axelson) drives much of the action of the show through her struggle to maintain control of a world that she recognizes less and less of.  The Velociraptor of Innocence (Parker Guidry) is her foil and the main character for much of the rest of the show.  It is her struggle to discover herself and her meaning that leads to the conflict between the old and new realities for the dinos.

Co-Directors Tommy Bullington and Nicholas Reinhart have put together a tremendous show.  The cast takes what could be just a campy bit of fun and creates something at least two notches of quality above that.  It is an evening of song and dance, and inventive drag costumes, and while it doesn’t pretend to be anything more than that, “Triassic Parq” is indeed more than what one expects, and is better for it.