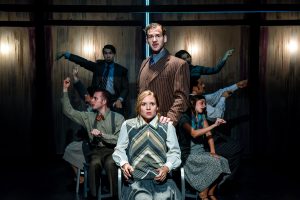 My favorite sequence in Greenhouse Theater’s 1928 “Machinal” is at an unnamed bar at the site of just about everyone’s clandestine encounters. In one corner, a woman helps a friend in the family way (they arrange an abortion), near them is a man inviting another man to have a look at his Poe collection (join him for sex), all as our protagonist pairs off for an extra-marital affair. Each of them is allowing their impossible fantasy to play out, knowing that time spent away from the grooves they occupy in the great machine is fleeting, at best. They will have to let a few of their unproductive traits wither and die if they wish to keep surviving in relative comfort.

It is in that fleeting space, we keep meeting our protagonist, Helen or maybe Ms. A (Heather Chrisler); don’t worry, names don’t mean much in this dreamy, expressionist landscape. She’s employed as a stenographer, and unfortunately/incredibly for her, the boss (Sean Gallagher) develops a crush on her dainty hands. The problem? Helen recoils at his every touch. Still, when he proposes, she’s simply not in any position to turn him down, no matter how disgusted she is. In what seems like seconds, she’s married, and after a few more seconds, she’s the mother of a newborn girl. She’s always enveloped in the anxious call of eerie strings, until she meets a free-spirited lover (Cody Proctor), who, of course, cannot stay. He gives her a moment’s happiness, a potted plant, and a terrific idea for how to kill her unwanted husband. There’s always the pestering clack of typewriter keys to follow her, however, and train cars full of anonymous bodies too close for her to breathe free.

Sophie Treadwell’s 1928 script is almost like watching what would happen in a person’s subconscious mind. Our protagonist only remembers her darkest and most exhilarating moments, burned into her memory with the intensity of regret and longing. What comes between those moments is the most beautiful nothing and strangeness that director Jacob Harvey and movement director Elizabeth Margolius can conjure with just light, eerie music and their actor’s bodies. 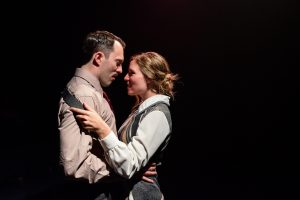 The performances from start to finish are what keep things tense, sometimes frighteningly so. Heather Chrisler at the center of it all, is quite amazing to take in as Helen. She has nothing to sell us, no persona to hide under, and no want for anything more than just an inch or two more of her own breathing space away from everyone. Her asthmatic physical constriction at her own confinement is downright compelling. She volleys between jovial husband extraordinaire, Sean Gallagher, who is carefree in the way only successful white men are allowed to be, and Cody Proctor, who unwittingly attracts where he means to repel women like Helen, as her lover.

There are no slouches in the show’s ensemble either; notably, Sarah Rachel Schol is a ferocious office efficiency tyrant, Jonah Winston is barely containable as both a judge and an excitable restaurant diner, and Scott Shimizu is a whirlwind both as a doctor and a philandering husband.

Despite its advanced age, “Machinal” still has a lot to say to us in our new century, and mines a very cut and dried true historic event for all the deep lonesomeness and fear that the courtroom stenographers tend to leave out.

TEN WORD SUMMARY: Going to battle against the patriarchy? I hear ya, sister.