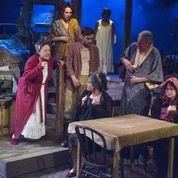 A quick admission that will shock absolutely no one: I am a huge fan of covert eavesdropping. Neighbors, you can safely assume that if you are having a fairly audible tiff with the missus, I have put my television on mute and am listening for all the lurid details. The same goes for phone arguments on public transit; I may look like I’m reading, but it’s a façade and I’m actually listening intently. Nowhere is this habit more celebrated than in Tennessee Williams’ 1977 drama “Vieux Carré”, in which a number of derelict residents in a New Orleans boarding house fail utterly in convincing anyone but themselves that they are still healthy, employable and respectable members of society.

There’s landlady Mrs. Wire (JoAnne Montemurro) a tyrant with memory loss, not above spitting on, screaming at and scalding her tenants to keep them in line, and consumptive artist Nightingale (Will Casey) proclaiming his cough is a bout of asthma, nothing more. Across the hall are Jane and Tye (Eliza Stoughton and Joel Reitsma) a disgraced socialite and her drug-addled lover who can only be woken for sex or sparring. Housekeeper on the constant verge of retirement, Nursie (Sandra Watson), corrals the remaining roster of vagrants and deviants, however ineffectively.

Tying them all together is Williams’ own proxy without a name. The Writer (Ty Olwin) barely has the chance to reclaim his hocked typewriter before the blank-slate boy is claimed as a fellow conspirator, son, nubile ward and chess partner to each of the residents. They embrace him instantly, and in turn, the writer spends his hours with an ear cupped to each of their doors.

“Vieux Carré” is rendered beautifully onstage at the Raven with wallpaper tears, plaster cracks and burned out light bulbs.  It is languid even in the face of enormous stakes. It takes these tenants some convincing that the inevitable dissolution of their lives and relationships has begun. We in the aisles wait patiently for them, already well educated in the downward trajectory to expect from William’s iconic characters (There’s an equal cultural significance to Stanley Kowalski, be he a brooding Marlon Brando or a singing, dancing Ned Flanders). There is not even much shock to the sex and violence that punctuate rainy evenings at the Vieux Carré that our Netflix queues haven’t adequately prepared us for.

The interesting question that “Vieux Carré” raises and leaves hanging, unanswered for us, is where exactly the line is drawn between observer and participant. At what point does the collecting of stories leave a bitter taste in the mouth of the person with some influence to change those stories? Williams’ writer becomes shameless in his pursuit of intimate secrets, but when it becomes apparent that the tenement and its residents are sinking into oblivion, neither his conscience, nor the weight of kindness he’s been shown, is quite staunch enough to keep him from fleeing the wreckage. Still, I must remember to remove my own cup from the door before passing judgment on the lad.

“If somebody does something stupid in front of him, David [Sedaris] says, he goes home, writes it down, tells his friends and sometimes turns it into a story that he reads in front of thousands of or tens of thousands of strangers. And so, when he says something stupid he believes that it is possible the shopkeepers and waiters just shrug it off and never think about it again. But it seems just as possible that they go tell their friends and laugh.” -Ira Glass describing David Sedaris, This American Life.