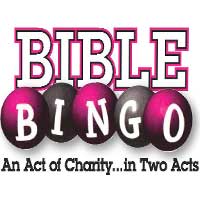 “Bible Bingo” by Vicki Quade is a really good show.  It isn’t necessarily a play, per se, but basically a theatrical event which circulates around a fictional fundraiser for a Catholic School/Church.  The action is freewheeling, improvisational, and interactive.

This production is a perfect example of why I include shows on my chart that are later in their runs.  According to the listings on TheatreInChicago.com, this show won’t be closing until November 2nd, and it has been open since March.  It is set for a long run, but I expect that it might not survive that long if the audiences are as sparse as the night that I attended.  And, that would be a shame.  When it comes down to it, this show deserves to have a full house nightly.

Now, when this show debuted, its author was also its star, so other reviews you’ll read about the show will mention her performance.  For the night that I attended, the one-woman show featured Michelle Renee Thompson, who brought a spirited former nun to life.  Mrs. Mary Margaret O’Brien (Thompson’s character) was a nun once upon a time, but left the order.  One supposes that she did so because of love, but it may have also been due to some of her irreverent quips.  While I’m sure that it is a treat to see Quade in the part, I can tell you that those who catch Thompson’s performance are in for a really enjoyable evening.

Throughout the evening, there were Catholic jokes (as one might expect at a nun-themed show), but not so many that non-Catholic audience members would feel out of place.  In fact, the only knowledge one must possess regarding the Bible, Catholicism, or parochial school, is that which you could come by in popular culture.  Have you heard about nuns using rulers for discipline?  Good.  Did you know the Pope is Catholic?  Great!  Have you heard of some guy named Jesus?  You’re all set.  I attended with my 15 year-old daughter who has very little religious education.  She understood everything and enjoyed the show thoroughly.  Personally, I was raised Quaker, and my knowledge of the Holy See comes from history texts and conversations with primarily recovering Catholics.  I had more than the necessary working knowledge needed to participate actively in the show.

Some of the show’s humor is gauged for those of us who grew up in the 80’s or before.  But, Thompson delivered some other bits which tied into the more recent sensibilities of today’s young people.  And, I guess that’s something of note which I should mention again: my daughter is about to be a sophomore in high school.  She really enjoyed herself at the show.  Not every play out there can accomplish what “Bible Bingo” did.  For just under 2 hours, I witnessed a performance that involved, teased, amused, and equally entertained people of no fewer than three generations.  One woman in the audience was celebrating her  70th birthday.  I clock in at 30 years her junior, and my daughter is 25 years younger than me.  Each of us laughed, blushed, and played games.  We all won prizes, and truly had a great time.

Audience participation sometimes makes me cringe.  It is often a way to get cheap laughs.  But, the involvement of audience members in this show makes it feel like a bit of community investment in what is going on onstage.  I did get up onstage at one point, as a member of a trivia contest.  It was fun.  At no time did I feel that I was being made a fool for the sake of laughs.  And never did I perceive that anyone who was called on stage was uncomfortable with the experience.

In a way, the play is more like the event that it is supposedly bringing to life than a traditional stage play.  A number of people get together to have some munchies and drinks.  They play a few rounds of Bingo while they laugh, sing, chat, and goof around.  It is a beautiful thing.

Side note: My daughter won one round of Bingo.  I won another.  As one of my prizes, I won an old LP of Tammy Wynette songs.  For fun, I’ve been listening to the album while writing this review.

This show isn’t high art, nor does it need to be.  I’m pretty sure if it were, I wouldn’t want to see it again.  Instead, I expect that I’ll go back at some point when not wearing my critic hat, just to have a good time.