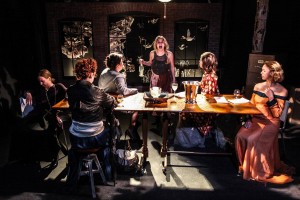 This is the second Caryl Churchill play I’ve seen in the past four-ish months, and, while I applaud the complexity of her scripts, I also think they are extremely difficult to perform, and that they are a product of their time of writing.  “Top Girls” is a collection of scenes loosely tied around a few days in the life of Marlene, a woman who has just achieved a directorship position at her employment agency,”Top Girls”.

It begins with a dream sequence – a rowdy dinner party hosted by Marlene that features famous historical female figures.  This was by far the most interesting part of the show, anchored by the excellent Pamela Mae Davis as Pope Joan. A puzzling choice of casting was of  a non-Asian actor to play a famous Japanese concubine, Lady Nijo. The Japanese dialect spoken by Lana Smithner, while probably accurate, was so at odds with her appearance that it the whole character came perilously close to charicature.

Another troubling aspect of this scene was the “talking over one another”conceit, presumably employed by the script, but which produced mixed results. Sometimes the volumes of various small conversations would ebb and flow naturally to highlight different topics around the table so the audience could float from character to character; but mostly it sounded like people shouting across the table, trying to top one another. Davis as Pope Joan was about the only one who could take and give control of the various conversations naturally.

The rest of the play happens in the “real world”, either at the employment agency or at the home of Marlene’s sister, Joyce. It becomes a rather domestic tale of a woman who has decided to choose between conventional wife-motherhood, or a successful career. Remember, it was written in the 1980s, and some of its assumptions betray its age.

Ultimately, the problem is that none of the characters are all that sympathetic. In fact, some of the women perpetuate negative female stereotypes without addressing their underlying sources. At the time of its writing, “Top Girls” was bringing to light issues that women face in the workplace that had long been swept under the carpet, but in 2015, it doesn’t go far enough. The issues women face today are similar, but there’s a lot more nuance and variety in how we face these challenges than you’ll see in “Top Girls”.

The actors are all adequate to their tasks, and I especially liked that they turned transitions into some kind of business-chic catwalk routine to bass-heavy trance music, but all in all, the show just doesn’t seem quite relevant. Of all of the various relationships hinted at in the play, the strongest and most believable was between Natalie Sallee as Joyce and Patricia Lavery as Marlene. The first time the play really came alive was in the final scene between the two sisters as they gradually reveal through their conversation how events came to be.

“Top Girls” presents its age and its structure as tall obstacles to a producing company. The Arc Theatre comes close, but can’t quite overcome them in this show.