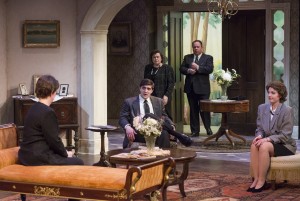 “Dividing the Estate” is one of Horton Foote’s final plays. Set in 1987, it concerns the non-existent fortunes of an old Texas family that spends most of its time worried about preserving each individual’s status quo. Like many Foote plays, it’s more about the everyday relationships in a family than a single dramatic event.

Reviews of the 2008 Broadway run praise the show’s humor and humanity. Unfortunately, neither was present in the Raven’s production. There are a paltry few characters that seem to live onstage; the rest simply wander around the house and wait for their turn to speak.

The first issue I have is with the set itself. It presents beautifully: the foyer, parlor, and formal dining room of a grand old dame of a house that has clearly passed its prime. It’s also enormous. It dwarfed the actors. Especially in the first act, actors ended up in small clumps on one side of the set or another. The set pretty much swallowed them whole and left them fighting to own the space. If I could rationalize this as a choice, I would, but there was nothing in the acting, direction, or text that suggested that this was so.

Furniture is arranged in straight lines from upstage to downstage so that actors consistently face away from the audience while speaking. The worst example is a rather long scene toward the end of the first act when the whole family sits down together to eat, and the entire table is blocked by one actor who sits with his back to the audience. I had no idea what was going on or who was talking because I couldn’t see a damn thing. At that point, I pretty much gave up and instead tried to find something interesting to look at for the next ten minutes.

Another issue was volume. Between the set design, the choice to block actors facing away from the audience, and the inability of some of the actors to project, a lot of dialogue floated off into the ether. Too many actors ended up speaking past each other instead of to each other.

On the whole, individual characters came off as one-dimensional. Exceptions included solid turns by Tim Martin as Son, and Jon Steinhagen as Bob.  By far the most genuine performance was Eliza Stoughton’s Pauline, who seemed to be in another (much better) play.  Hillary Horvath as Irene was also a treat in a small but hilarious cameo at the end.

This was altogether a disappointing experience. There was little to engage an audience, and the show went from mediocre to tedious awfully fast. While I applaud Raven for focusing on one playwright this season, I wish they would honor him with a production worthy of his work. I rarely give out the lowest rating for a show because I try to advocate for all theatre experiences – but this one is not worthy of your time or your hard-earned money.