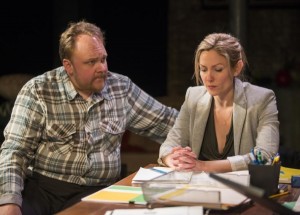 I had an extreme reaction to “A Kid Like Jake”, which I saw this past Sunday.

When I say “extreme”, I mean that it’s taken me two days to regain some sort of perspective so I can try to give the show a fair shake. Yes, this is now a Jeff-recommended production, and maybe the show deserves it. It’s well-designed, and Michael Aaron Lindner (Greg) is not only the finest actor in the play, he makes the other actors look good, too. Scenes without him tend to drag, mostly because the actors talk past each other instead of to each other.

The play’s premise sounds good on paper: Alex (played adequately by Katherine Keberlein)  and Greg are wading through the wilds of Manhattan’s posh private schools for the perfect kindergarten in which to place their four-year-old son. The thing is, Jake has recently shown interest in wearing dresses and playing a princess, and that places stress on the little family. How do they deal with this?

If the play had continued on as a thoughtful exploration of how parents choose to address cross-gender questions, it would be a show worth watching. However, playwright Daniel Pearle is running a con. Neither Jake and his needs, nor how his parents deal with this very timely complication, are important.

Instead, Pearle focuses on the constructed crises of Jake’s mother, Alex. She’s well-off, educated, white, heterosexual, spoiled, neurotic, destructive, and so focused on what society might think about her son’s choices instead of his welfare that I wanted to call Child Protective Services on her about ten minutes in. Make no mistake: this is not a show about how to nurture a child who may identify outside of his gender. This is a lazily-plotted, cliche-filed hour and forty minutes of a selfish adult behaving badly.

What infuriated me most is that “A Kid Like Jake” has no LGTBQ focus or thought, as is implied in its tagline. It’s barely a nod to an important issue of a very underrepresented population. Surely there are better plays out there that investigate child gender questions in the twenty-first century. Where’s the LGBTQ perspective? Also, are well-to-do white, hetero Manhattanites the only class of people who cope with unexpected child behavior? What does it say about our priorities if we think a prestigious kindergarten will somehow turn a child into a guaranteed success, and that his placement in or rejection from such a place could make or break him for life?

Instead, the play expects us to sympathize with a woman who has everything and still paints herself as a victim. This family has access to all of the resources America offers –  if you’re of a certain demographic.  They have no serious obstacles in life save those they create for themselves. They can afford to send Jake to a progressive pre-kindergarten that will help to prepare him for entry into a top-tier K-12 school. But if he doesn’t get into one of the top kindergartens in the city…then what? What are the fearful consequences? An excellent education? Broader social exposure? It’s implied that public schools are too scary for a kid like Jake because they have no facility to support a “special” child. Even though Greg is the product of a public school education (“But it was in the suburbs!” protests Alex), only the best will do for Mama’s little boy.

All of this elitist, insecure garbage is shoveled out through Alex , who spends her time fretting that her son will be stereotyped, or worse – held up as a poster-child for “difference” if his “choices” come to light.  There’s no room in her life for Jake to just be Jake – his every action must mean something. She exemplifies the stereotype of upper-middle-class, white, self-absorbed New-Yorkness that annoys the rest of America. When she finally pushes Greg past his breaking point and he calls her out on her toxicities point by point, it’s a welcome relief. The only character with a shot at getting through to her is finally smacking some sense into Alex. Finally, payoff!

Alas, no – because Pearle again takes the easy way out. There’s a bizarre dream sequence that is, I think, supposed to rationalize Alex’s actions, followed by a coda that implies that she is capable of change. Except that she doesn’t change. Her final lines cement her inability to think outside of herself. If Lindner hadn’t been present to inject some much-needed humanity into the play, it would be completely unwatchable.

I really had a hard time rating this one. If you want to go see a decently-performed play with good production values, have at it. If you like Michael Aaron Lindner (and I’m certainly looking forward to seeing whatever he does next), fine, go see it. But if you’re looking for a play that take a thoughtful look at gender identity and children, SKIP IT. You’re wasting your time.