Looking at this week’s chart, you’ll notice that it’s a complete overhaul from the last one that appeared in this space.  That’s partly because I forgot to post the chart last week and a two-week lapse will have major effects on the chart.  But, it’s also because February is apparently a massive time for openings.  No other month has resulted in a nearly weekly overhaul of the entire chart.  Not even October, which is the semi-official start to the theatre year for most companies.  I’m excited by that.  Things are about to cool down again.  I’m about to be in rehearsal for one show and production for another.  That means I’ll only be reviewing one show per week.  The ladies have their own projects as well.  It’s going to be an interesting spring.  I’m enjoying this last bit of the winter and its glorious rush of theatre until then.

Jackie, Maggie, and I will each take on one show this week.  So, that’ll be a good sampling of Chicago theatre at a glance.  At least, I think so.

A trio of specifically exciting things in the theatre world this week:

1) The Chicago Fringe Festival Lottery is this upcoming Saturday.  The lottery is held to determine which shows will be getting in to the festival which runs in early September up in the Jefferson Park neighborhood.  I went to the first Chicago Fringe back in 2010 when I first arrived in Chicago.  It was small and disappointing.  I attended last year’s Fringe, and it has blossomed over a short time into a fun, quirky, and unique festival.  I like it.  I’m going to hang out with the people who are watching to see if their ping pong ball is selected on Saturday.  You should come and join me.  If you can’t make it, they’re Live Streaming the event.  But, I won’t be able to have a beer with you that way. 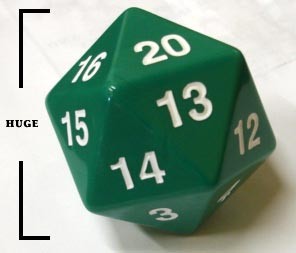 2) Not specifically theatre related, really just this column related … My wife got me a new 20-sided die.  It’s green and the size of my fist.  It is what I’ll be using to roll this week’s shows.

3) One show on this week’s chart merits special attention: “Faust (Save Me or I’ll Die)” is something intriguing to me on a couple of levels.  First, the director has been pushing publicity pretty hard for quite some time.  And so I’ve been aware that this was happening for a while, but it was never showing up on the chart.  It’s there now.  So, what makes this show interesting in and of itself?  I’ll start by saying that it is not the subject matter.  The world does not need another rendition of “Faust”.  At least, not for its own sake.  There was a time when I was seriously into building puppets, and I wanted to conquer Faust as a major work.  But, why do what everyone else has done before?  Well, here’s the thing… this is actually a company created piece, so it may be something unlike what has been done before.  It might not be, but there’s only one way to find out… by seeing it.  What intrigues me most is actually what The Runaways Lab Theatre is doing for their venue.  They are constantly moving it from place to place.  The first press release I received declared that the play will never be performed in the same location twice, and that the venues are all secret.  Now, I don’t know about you, but the thought of a secret venue is perplexing to me.  I like to know where I’ll be viewing my theatre.  And over the years as a producer, I’ve come to realize that venue is often associated more closely with a show than the producing company is, at least in the eyes of the audience (I’ve had people tell me that “A Klingon Christmas Carol” was not done by my company but by the Greenhouse, the Raven, and even The Annoyance — where it was never even produced).  So, mostly I’m intrigued by the approach to staging and location that this show will be using.  Obviously, I can’t control whether it will appear on the dice, but it’s something I’m keeping an eye on.

Now for for randomness: