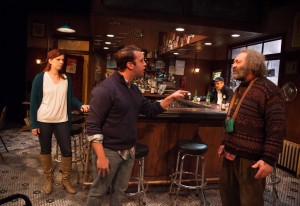 Sometimes, it feels good to dip your toes in communal waters, and pipe up with your side of the story when someone at the bar prompts a conversation with “I remember where I was, when _______.” The American Blues Theater sure hopes to rekindle our old memories of 9/11, but falls short with its production of Steven Dietz’s “Yankee Tavern”. Part conspiracy thriller, part love story left in the bottom of pint glass.

In the Yankee Tavern, a run-down pub awaiting a date with a wrecking ball, Adam (Ian Paul Custer) and Janet (Darci Nalepa), plan a wedding and a graduation. They are both gladly lured into barfly Ray’s (Richard Cotovsky) outlandish tales of conspiracy and too-coincidental to be coincidence hypotheses that cover everything. The government faked the moon landing (unless you’re talking about our second, invisible moon), JFK’s grassy knoll, and most importantly, the World Trade Center attacks of 9/11. His 9/11 theories are so lucid and plausible that Adam decides to decry them in his graduate thesis. But the trio’s focus on the minutiae lands them in a network of shadowy players like Palmer (Steve Key), and Adam and Janet are left holding more knowledge than their would-be marriage may be able to withstand.

This production finds its heart in Ray, brought to life warmly but weirdly by Richard Cotovsky, racing through pages of inexhaustible manifestos like miles in a marathon. It’s an incredibly hard task to keep up with a guy like Ray; he’s an encyclopedic holder of footnotes, keeper of keys, feeder of ghosts, and Cotovsky seemed lost in a sea of his own lines, at times.

I was lucky enough to quiz author Dietz in a post-show talk-back, and he described Ray as the closest he’d probably get to Shakespearean grandeur. The scales are a bit lopsided in this respect. Like Adam and Janet, we’d just as soon avoid the trivial duties of wedding preparation and hear more from the resident crackpot. This leaves actors Ian Paul Custer and Darci Nalepa with precious little to do until the narrative needs a break from conspiratorial jargon.

Director Joanie Schultz implores us to turn our eyes from any script deficits with an especially well outfitted dingy basement tavern, and I’d be lying if I didn’t admit to finding my way to my own scuffed bar stool, immediately after the show. Catching “Yankee Tavern” will allow you a fleeting chance to immerse yourself in a once strong national fervor, and take note of how that fervor has faded over the past 14 years.