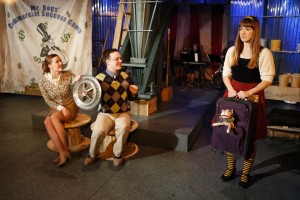 Lonely Camina just wants to go to Camp Fun for the summer so she can make some friends. Instead, her loving but over-anxious parents schlep her off to Mr. Boggs’ Camp Success, where she strikes a deal with the slightly shady businessman-cum-camp counselor: if she manages to grow the perfect winter tomato, Boggs will consider her a success and let her go to Camp Fun. Along the way, Camina learns important lessons on friendship, hard work, patience and rewards.

It’s a cute idea based on good themes, but unfortunately the script is a mess. While the music is snappy and well-done, the storyline gets lost numerous times in the first act, although the second act rallies and the production finishes nicely enough.  In particular, a go-nowhere subplot involving the Evil Scientist could be completely excised with no loss of coherence. While writer Christine Kodak  and composer Scott C. Lamps were clearly aiming stylistically for something in the realm of “Urinetown”, the production falls short due to uneven acting and the aforementioned script issues.  Each character needs to be bold and strongly-drawn; some actors managed it, most notably Kirk Osgood as the delightfully vaudevillian Hawker. Had all the cast managed their versions of  his broad and committed performance, it would been a totally different show.

Most of the characters are thinly drawn, and the actors don’t have much wiggle room to break out. Everyone has wonderful voices, though, so the show sounds lovely. One outstanding moment: Taylor Keenan as Mother has a beautiful song toward the end of the first act called “Mother’s Song” that was so distinct from the rest of the show that I wished the writer and composer had built a show around it, instead.

The only other outstanding moments of the show involve a very clever puppet of a monster worm that swoops in to attack Camina’s tender tomatoes and ruin her chances at success. It’s a three-person affair, with Osgood stepping in as primary puppet-handler, and again, Osgood injects as much well-needed panache via the puppet as he does in all his myriad appearances as a human character.

There are a lot of good notions present in “Tomato Queen”, but it needs a few more workshops before it grows into itself.  Small fry under 10 will probably appreciate it for the colors and music, but there’s not a lot of fodder for adults.