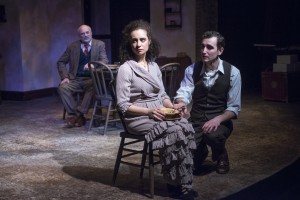 Show: Beast on the Moon

“Beast on the Moon”, playing now at the Raven Theatre in Rogers Park, is a moving example of a social issue play done right. The subject is the Armenian Genocide of 1915 – or rather, its effect. Two young people, sixteeen-year-old refugee Seta, and her twenty-something husband Aram, have to figure out what it means to be an Armenian in America. Neither has any family left and they both desperately need the other person to fill in those missing pieces.

Seta is young and somehow still naive in spite of her circumstances, and Aram is more a boy playing a man than an actual grownup. In the first act they engage in an intense tug-of-war about their marital roles. Of utmost importance to Aram is children: he wants a lot of them, and he wants them now. We’re never really sure about Seta’s opinion on the matter, although she dutifully goes along with his rather cold demands for intimacy. Both agree, though, that having children of their own will ease some of the pain of losing both their families and their histories.

Along the way, a Gentleman provides commentary and sets up each scene, and it becomes clear pretty early on that he’s more than a mere observer. He doesn’t sit to one side, “Masterpiece Theatre”-style, and speak up every once in a while. Instead, he prowls through the scenes, always in the background, never distracting, and occasionally lending a helping hand.

The production looks beautiful, and as a former resident of Milwaukee, I have to give props to the Kristin Abhalter’s design of the Tomasian apartment, because it’s spot on. Director Michael Menendian has cleverly melded visual and audio technologies and used them to great effect as well, without sacrificing the period feel of the piece.

Performance-wise, the show drags a bit, especially in the first act. Sophia Menendian is a capable young actress clearly not much older than Seta, but I didn’t believe the character in her teenage phase. Menendian looked uncomfortable and awkward (and not as a choice), as if she didn’t quite buy herself as a teenager. In the second act, however, she seemed more grounded and comfortable, and as a result, her entire performance improved.

Matt Browning was very good as Aram, a boy who is trying to be his father in a desperate attempt to bring him back from the dead.  The danger with a character as buttoned-up as Aram is that he becomes a one-note cold fish. Fortunately, Browning’s performance is subtle and deft, and he makes it look so natural. Aram is a bomb primed to go off, but when he finally does, it’s devastating.

“Beast on the Moon” can be a little uneven at times, but it’s well worth a look. It’s an unnerving reminder of both human intolerance and fortitude, and a necessary reminder for our increasingly disconnected society.

DICE RATING: d10- Worth Going To