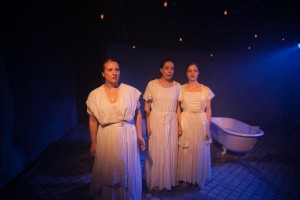 Signal Ensemble Theatre’s US premiere of “The Drowning Girls” is a lovely piece of theatre. Combining lyrical prose, memory, and many characters, three women guide us through their unfortunate relationships with a serial killer. George Joseph Smith wooed, married and drowned Bessie, Alice, and Margaret roughly one year apart from each other. Together, the wives relive the events leading up to their deaths. Over the course of a perfectly-paced eighty minutes, they discover truths about love, relationships, marriage, and their places in the world.

Each of the three women is wonderfully distinct and well-cast. Katherine Schwartz plays first wife Bessie with a sweet naiveté. Meghan Reardon adds fire to the trio in her tempestuous Alice, and Anne Sheridan Smith brings sensible, bittersweet humor as the wife number three (Margaret). Along the way, they speak to not only their personal desires, and the trials of womanhood in the Edwardian era, but also to society’s part in their murders. Smith fooled each woman completely by appearing to be the epitome of Edwardian manhood. We see Bessie, Alice, and Margaret respond to his attentions as society has conditioned them to – and it proves to be their undoing.

The set is both deceptively simple and effective: three clawfoot tubs, a handful of props, and some outstanding lighting design by Michael C. Smith. Such elegant simplicity perfectly frames the actors’ performances. While the theatre is small, there is no bad seat in the house, including the front row – which I highly recommend.

“The Drowning Girls” has it all – moving performances, a great script, and an excellent company. Treat yourself to this show.

TEN WORD SUMMARY: Together in death, wronged wives seek justice for their murders.