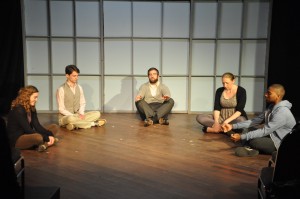 A teenaged girl finds herself in an adolescent psych ward following a dangerous relationship with an older man. While there, she’s forced to confront her fears and relive the events that led to her confinement. For a play dealing with such heavy issues, you’d think it would have more substance.

Poor Kendra (Amanda Forman) is isolated and misunderstood. The adults in her life are all clueless, while the teens are all older than their years. It’s like a John Hughes movie, complete with character tropes. There’s the kind but ineffective counselor; Kendra’s selfish, immature mother; and the “nice” guy she meets in a park who turns out to be the worst kind of predator. Her “best friend” on the outside is a self-involved twit who unwittingly keeps throwing Kendra and her attacker together. In the psych ward, we meet another round of stereotypes: the sweet-but-odd-nature-obsessed-boy, the totally shut-down girl who injects inadvertent humor into tense situations through her actions, and the cool kid who immediately bonds with smart-ass Kendra over being Too Good For This Place.

Aside from the characters, major problem of the play is that Kendra is overburdened with Issues. Not only is she damaged by an absent father and a mother who’s an immature nightmare, the one meaningful relationship in her life ends horribly in rape — and she’s a cutter, which turns out to be her “target behavior”. She doesn’t have just a mountain to overcome – she has the whole range. Every scene has our beleaguered heroine tackling one overly dramatic situation after another. There’s no time for reflection and character growth because the scenes only average about five minutes, so no one has time to react to what just happened. Things just keep clipping along at a high intensity with no clear purpose other than to show us how hard her life is.

I’m frustrated by this play. I think its intention to bring awareness to mental health issues is admirable.  But that awareness isn’t served well by a play that provides cliches instead of characters, and a series of melodramatic events in the place of a compelling story.  For an early draft it’s ok, but it’s a long way from a finished product.

TEN WORD SUMMARY: Plays like a tv teen drama about Kids With Issues.

DICE RATING: d6 = Has Some Merit