When John Reeger and Julie Shannon wrote “The Christmas Schooner”, they penned a musical that really is the perfect holiday show for Chicago.  Sure, if you look at what is offered in this market as holiday fare, you might assume that sketch comedies on holiday themes are what we want, but that’s not the case at all.  We want what everyone wants at this time of year: a bit of nostalgia, a bit of cheer, and a holiday show that we can relate to.  And we can certainly relate to a play set in Chicago itself… well, at least, part of it is set in Chicago.  This musical, under the direction of L. Walter Stearns, is a vibrant, celebratory, and touching look back into a simpler time when Christmas trees weren’t made of plastic, and when men risked their lives to spread holiday cheer by sailing a ship full of firs from the Upper Peninsula of Michigan.

It is easy to become jaded by Christmas shows, especially for those of us who have made the business of holiday productions our livelihood.  But, that just makes it all the more special when a show comes along that rekindles the holiday spirit in our own hearts.  “The Christmas Schooner” did that for me.  When the scene first opens on a family’s home in the UP, we meet Alma (Brianna Borger), Karl (Peyton Owen), and Gustav (James Wilson Sherman).  Life seems pretty good for this group, especially when they are then joined by Alma’s husband (and Karl’s father), Peter (Stef Tovar).  Peter is the captain of a ship who fondly remembers his childhood Christmas celebrations in Germany.  And, because a cousin in Chicago writes him about how she misses those bygone times around the tree, he conceives the idea of an annual trip to sell Christmas trees in the Windy City. 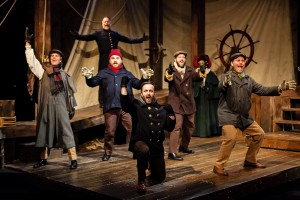 This is a story about standing for something that means something.  It is a story about faith, trust, honor, and hope.  And when it comes down to it, it is a story about family and legacy.  What can each of us do in our lives to matter when we’re gone?  Peter Stossel made a massive difference in hundreds or thousands of people’s lives through his Christmas Tree Ship.  Within the play we only get to see a tiny handful of his customers.  What we see more of is the group of people around him: his family, his crew, and the people whom he touched directly.  And it is clear that one man can make a huge difference in people’s lives for the good.

This story would stand on its own no matter the production qualities, but in the hands of Mercury Theater Chicago, it is elevated to something special.  Jacqueline and Richard Penrod have made a set that does admirable double duty as both the Stossel home and the “Rouse Simmons” (Stossel’s ship).  It allows the cast to inhabit the two worlds seamlessly, and captures both the comfort of the warm hearth, and the exciting danger of the open expanse of our inland freshwater sea.

I didn’t come away from the performance with any specific song stuck in my head.  This isn’t a musical filled with catchy hooks.  The music here is such that it bypasses the part of your brain that grabs firmly onto pop tunes.  Instead it goes straight to the heart.  Each time singing entered the picture, it was because that was exactly the right way to tell that part of the story.  The music of this musical resides in a world where singing is a completely natural way to express oneself.  That’s wonderfully refreshing.

I know why theatres put on holiday shows, and why they bring the same ones back year after year.  Much of that has to do with money.  But, not all of it does.  Just as Peter Stossel and his crew discovered on their first trip to Chicago, there are some traditions that are worth doing year after year for their own sakes.  And I believe that Mercury Theater Chicago has found one of those traditions in this show.  I know that I’ll be back next year, for sure.

TEN WORD SUMMARY: Some traditions are worth saving.  Others are worth spreading everywhere.