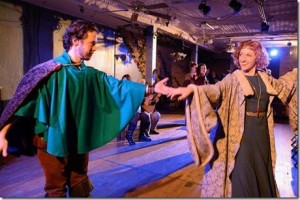 It’s hard to imagine a world before the many adventurer protagonists that clutter our popular culture landscape were conjured up. Bleak times call for stories that bestow people with the sort of human valor that no one sees in real life. It’s no wonder we’re so devoted to our professors in fedoras, time-hopping teens in puffy orange vests and archer outlaws in jaunty green caps; they get the rewards we all hope to achieve. So long as they don’t fall prey to, uh… what’s a better word for the Dark Side?

Strawdog Theater and adaptors Forks & Hope have crafted a very savvy adaptation of “Robin Hood and Maid Marian” that delivers the granddaddy of all ‘good triumphing over evil’ stories, sketched very sparingly by director Matt Pierce.

When their beloved king disappears in battle, life becomes very difficult for his loyalists, Robin Hood (Caleb Probst, lone straight man to the cast of clowns) and Maid Marian (played bold and fearless by Kelsey Shipley). Each of them rebukes interim ruler Prince John (Andrew Bailes) and Sheriff of Nottingham (Christian Stokes), both glorious in their moustache-twirling villainy. Robin is stripped of his land and title as a result, but he and his men go into hiding in Sherwood Forest, undermining Prince John at every turn. He vows to protect Marian, her eccentric father (Amber Robinson) who is also in danger of having his land seized, and any soul who pledges loyalty to King Richard (Stuart Ritter). The most sought after outlaw is Marian, who will not consider any suitor, prince, sheriff and outlaw included, until the king has returned to give her away. Even in exile, Robin has her favor and it’s not hard to see why- he’s handsome, fair, respectful and beloved by his followers.

The Forks & Hope troupe have a terrific knack for theatrical suggestion; they imply flocks of birds, herds of deer and great overstuffed banquet halls with little more than the change of a hat. “Robin Hood and Maid Marian” demonstrates the winning effect of a wonderfully in-sync ensemble, keen on filtering each moment for every last drop of hilarity. They sing and fight and pratfall in broad, commedia dell’arte style. The raucous party spills into the close-proximity audience whenever the ensemble is in need of witnesses, revelers and confidants.

In an effort to make a very white male-centric folk tale more inclusive, some genders have been swapped. For instance, Marian’s old father, Sir Richard is Amber Robinson, both doddering and unhinged. And the usually large Little John is played by Suzanna Ziko- a poignant choice for a character who obsesses over his masculinity with his forward love, Kate (Kaitlyn Majoy). I only wish that this production had made the same effort to court a more racially diverse cast. For this slightly immersive production, it’s only fitting that Chicago theater goers of every stripe should be able to see a bit of themselves in Sherwood Forest.

TEN WORD SUMMARY: A feast for eyes and ears on a shoestring budget.