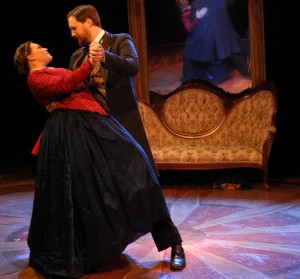 Show: The Gilded Age: A Tale of Today

I should love a show like City Lit Theatre’s “The Gilded Age”.  It has so many of the hallmarks of timeless and effecting theater, but it also makes distinct fumbles that are hard to ignore. At its surface, the Mark Twain novel turned theatrical world premiere is just what I look for in a production: A minimal, unfussy staging, feminist in its bones. By nature of following a woman in politics, the production calls forward to our current era of notable women in Washington and what unfair and unchanged social scrutiny they face nearly 150 years later.

But there are also notable blank spots. Director Adam Goldstein and adapter Paul Edwards navigate this story through narrow channels, hoping their audiences don’t notice how close their skiff runs to the river floor.

In “Gilded Age” Laura Hawkins (Jacquelyne Jones), a civil-war era orphan, is adopted into a family that is trying to unload their legacy- a sizable chunk of worthless land- on anyone who will give them a decent price. The endeavor takes the life of patriarch Sy Hawkins (Wesley Scott), and the bankrupt family turns to hucksters like Escol Sellers (Scott Olson) and shifty politicians like Senator Dilworthy (Mike Speller) to put food on the table.

Meanwhile, Laura is freshly wedded and freshly scorned by her husband, Colonel Selby (Drew Johnson), who neglected to mention that he was already married. She joins her brother Washington (Erik Burke) to woo voters to support a bill that will allow the government to pay a fortune for the Hawkins land. With each politician she seduces, Laura becomes a powerful champion for her bill and an instant social mainstay, that is until Selby returns, and Laura’s life, knotted around so many spineless men, is left to unravel as they all disappear.

Laura Hawkins is a feminist long before the cause had a name, and thanks to an endearing and unrelenting performance by Jacquelyne Jones, we can see just how uncomfortable Laura is with being lumped into any demure designation. She is decisive, cunning and she will win all. Mike Speller and Scott Olson standout wonderfully as men on either side of the corruption spectrum, reaping the spoils of the hardworking rubes they employ.

‘The Gilded Age’ is what it claims to be, a tale of today; A disproportionately white male story, punishing to outspoken women and painfully absent of any diversity on stage. You could argue that Twain’s source material is unfortunately homogeneous, but I will argue right back that entrusting more roles to actors of color would serve to highlight the insidiousness in our own history that Twain wanted us to see. This particular brand of insidiousness is still very much alive, and one of the great ways we can fight it is to turn more stories over to the people who have been unfairly placed in the footnotes.

TEN WORD SUMMARY: Gilded Age, while beautiful, suffers under its own sparkly paint.