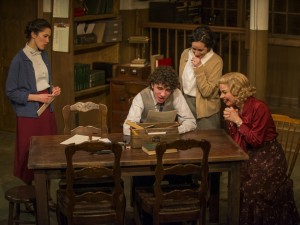 Griffin Theatre’s “London Wall” gets by on a lot of charm and heaping spoons of nostalgia stuffed into every stage crevice. It’s so well designed, and immaculately costumed/coifed you might soon after find yourself in an antique shop with an armload of copper lamps and lacy hats with no memory of how you got there. It’s one part examination of unfairness to British women in the 1930’s workforce, one part syrupy romance, and one part office comedy replete with stock players you’d probably still find pushing paper in 2016.

To manage all those working parts, and permit these working stiffs their afternoon tea, the production clocks in at just under three hours. That time stamp may be a little much, depending on your affinity for accents, and young love and somewhat dated material.

In “London Wall” the protective, most senior woman in the typing pool at the Offices of Messers Walker, Windermere & Co, Miss Janus (Vanessa Greenway) has taken their new hire Pat (Rochelle Therrien) under her wing. Young Pat has a feckless admirer, Hec (George Booker), but she is pursued unrelentingly by the office Don-Draper-look-alike Mr. Brewer (Nick Freed). The typists are paid next to nothing, so there are high expectations when awaiting a plum engagement, like Miss Janus, going out on the town with top earning gents, like Miss Bufton (Amanda Powell), or waiting for your affair to result in divorce proceedings like Miss Hooper (Ashley Neal). Pat and Miss Janus buckle under the constraints that their London office places on them. They juggle industry imposed poverty, loneliness and the advances/dismissiveness their male counterparts dole out to them. Without a little deus ex machina salvation from weird and wealthy client Miss Willesden (Mary Poole), the future would look bleak.

Director Robin Witt has assembled a knock out cast of incredibly funny women, all who abandon their dignity, naivety and sophistication and walk off with the play stuffed into their briefcases. Rochelle Therrien stands out as Pat, a graceful doe just beginning to realize her woodland is full of predators. Likewise, when Vanessa Greenway’s Miss Janus reduces resident lech Brewer to wordless discomfort it sent shockwaves through the audience.

One thing that would benefit “London Wall” and evoke the era of author John Van Druten’s 1931 play even more, would be to ramp up the pace of this leisurely office. We get brief glimpses of the staffers sent into a panic by buzzers and phone calls, and it’s a wonderful energy boost to a very long show. Another thing that would be lovely to see here, or on any Chicago stage at any time? A more diverse cast. There is room for more actors of color on “London Wall”, and I would love to see Griffin Theater and other Chicago mainstays contemplate the ways their productions could be more socially relevant to a city that boasts one of the world’s most diverse audiences.

TEN WORD SUMMARY: Leisurely day at the office could pick up the pace.