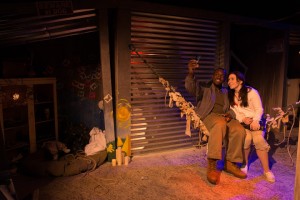 Show: Dreams of the Penny Gods

Halcyon Theatre has a new home on the third floor of Christ Lutheran Church near the Kedzie Brown Line stop.  It’s exciting when a theatre gets a new permanent home.  It’s even more exciting when the company takes a non-traditional theatre space and through skilled technical work transforms the space into an immersive environment to see theatre.  Halcyon has accomplished this fully.

Michael Chancellor’s set design brilliantly encapsulate the experience of entering a dilapidated multi-unit storage facility that is also being used as a living quarters.  Did I know what that would look like prior to entering this space?  Nope.  But, I instantly felt that I was brought into that world and that it completely clicked as being right. 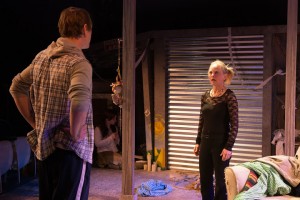 The lighting (as designed by Cat Davis) was also impressive as it played back and forth between the play’s realistic moments and its more fantastical ones.

There is an old adage among technical designers that their work is only mentioned in reviews when something goes wrong.  In this case, however, I find cause to mention the work of the designers because they stand out as what went right with this production.  I can also give kudos to a cast that was uniformly solid and clearly fully committed to the characters that they are creating.  And director Jennifer Adams for pulling what she could out of Callie Kimball’s script to guide the actors in creating those characters.

The base problem with this show was that initial script however.  This play focuses on the character of Bug (convincingly portrayed by Caity-Shea Violette), a 13-year-old girl who may or may not be at a coming-of-age moment in her life.   She’s been raised in a cultish atmosphere that has kept her sheltered from the rest of the world and contributed to some bizarre beliefs and behaviors.  She lives in a world of abuse: physical and mental/emotional.  The world changes around her as her father (Ted James) comes back into her life, and the woman who she thought was her mother turns out to really be her grandmother (Denise Hoeflich).  There is a lot that happens within the plotline.  But then, there isn’t.

If Bug is the main character, she doesn’t really go on much of a journey through the story.  At the very end of the show, her life is about to go through some major changes, but the play ends before we can witness the journey that would truly be a coming-of-age tale.

So, what is this play, then?  Is it a snapshot of a dysfunctional, abusive family with all sorts of problems?  It attempts to be.  But, really it seems more like what you get if a person were to describe that same snapshot to you.  So much of the script’s conversations are exposition presented as a laundry list of all of society’s ills shoved together in one horrible family unit.  In some scripts I might lament plot holes, a lack of needed information.  In this one, I would call them plot speed bumps, extraneous information, topics, and other stuff has been packed tightly onto the surface in concentrated places.  And like real-life speed bumps, we hit them hard, they are unpleasantly jarring, and then they are left behind without making much difference to the journey.  Heck, even the titular line, delivered by James’ character, Bobby, feels like it has been cemented onto the script almost as an afterthought.

Despite all that, we do watch the play wanting Bug to get out of this terrible environment, but that part of the story doesn’t happen on this stage.

Basically, I would want this play to go through one more rewrite before I would want to see it on stage.  There is more than just a kernel of potential for greatness here.  The words that the actors were given don’t provide the loamy earth in which that kernel can grow.

TEN WORD SUMMARY: Clunky writing hampers script that aims to be something more.