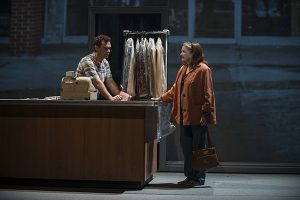 Before seeing Steppenwolf’s “Mary Page Marlowe”, I accidentally ended up consulting with two members of American theater’s largest audience, white women over the age of fifty. One had nothing but glowing things to say about Tracy Letts’ world premiere play, the other did not, but their even split gave me great hope; it’s so much easier to write about a production that you loved or loathed. Sadly, I wasn’t compelled to either extreme. Such is life.

Sometimes the most skillful acting, the most impeccable design, and a well written story can end up leaving you feeling hollow. What should move you to tears and ovation simply does not, and like the titular Mary Page, you’re compelled to see the value in every piece of the quilt that comprises you. It’s no less of an incredible thing to be invited to the playground where author Tracy Letts, director Anna D. Shapiro and a bevy of Steppenwolf ensemble members shape the future of American Theater.

We glimpse the life and times of Mary Page Marlowe through an assortment of snapshots strewn out of order, as if someone has upended her shoebox full of polaroids. She is played through the years by actors Caroline Heffernan, Annie Munch, Carrie Coon, Rebecca Spence, Laura T. Fisher and Blair Brown, each of whom haunt the photo frames of which ever Mary Page is in focus. Without pause, we flip through one transition, breakthrough or breakdown after another: negotiating the dissolution of a marriage with her children (Madeline Weinstein and Jack Edwards), spiraling down into addiction and depression with one husband (Ian Barford), and regaining control of her vices with another (Alan Wilder). Through the years we join Mary Page for sharp moments of childhood torment with her mother and father (Amanda Drinkall and Stephen Cefalu, Jr.), witnessing the callouses of her personality form. But, with every wall that goes up, Mary Page eventually encounters the loved one or inadvertent soul who knows how to vault it, allowing her to embrace the sweet sadness of her years alive.

The cast is a great mix of strength and warmth, with impeccable standouts, such as Stephen Cefalu, Jr. and Amanda Drinkall as Mary Page’s novice parents, who tire easily of parenthood and aim to quietly slip away as a docile child starts to become a multilayered human being. As mother and daughter, Rebecca Spence and Madeline Weinstein each end up as ballast to one another as tragedy strikes. This particular Mary Page may not be suited to the hardship, but her daughter aptly picks up the slack, leaving her mother to marvel at the individual who developed. With Blair Brown, we see a Mary Page who is finally starting to be at peace with herself; out of the longing and destructiveness of her past selves she cultivated strange stalks of joy and appreciation for those around her.

Anna D. Shapiro and Tracy Letts have given us a production of great beauty and backbone, and by parceling a single woman into six distinct people, they capture a very minute sadness that comes from looking back at old photos and recognizing the many unseen ways you’ve changed. “Mary Page Marlowe” also provides substantial, thought provoking roles (I mean, role) to a generous cast of women. This is still a theater landscape where women’s contributions can be boiled down to minute nuggets or non-presence (think of Erin Pike’s sad but accurate compilation of lines for most produced female characters in “That’s What She Said”), and “Mary Page Marlowe” does more than it’s fair share to correct the deficit.

You may not leave the theater a changed person, but you may be compelled to start seeing the many versions of yourself that exist simultaneously.

TEN WORD SUMMARY: A woman’s life; not the biggest revelation, but still beautiful.