Show: The Land of Never-Lack 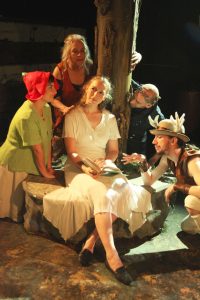 The myths and superstitions that grew from ancient Irish faery culture (and were held to be true, long after) are particularly fascinating, if you think about the social need for them. Why did my daughter never return home? Probably because faeries lured her away. Why did my wife’s personality change? With limited knowledge of brain chemistry centuries away, we can safely assume faeries did it. Case closed.

You’d think life would a be a torment at the mercy of these fickle beings, but really, what they offer is the shelter of easy answers in the face of cold, endless mystery. Codes of conduct are not just to ensure wives and children stay obedient, but to avoid provoking the wrath of the faeries. With “The Land of Never-Lack”, Cave Painting Theater brings faeries to life, but hardly do justice to the menacing beings. Instead, author Harold Jaffe brings us two fairy tales that are mostly gentle and whimsical. Great if you need a bedtime story, but not if you want thought provoking theater.

In “Land of Never-Lack” a restless newly married woman, Maire (Therin Miller) and young child Siobhan (Gaby Fernandez) provoke mischievous and territorial faeries, and can’t resist their lure of eternal happiness, dancing and freedom, but quickly find that no faery claim can be trusted. When Maire and her husband (Stephen McClure) entertain her pious and judgmental in-laws (Sandra Howard and Michael Dwiggens) and a priest (Gabriel Howard) for supper, she summons an unholy faery child who would give Maire her heart’s desire if she leaves her family.

Rather than exploring the newlyweds in any further depth, another story with unrelated characters emerges, nestled in the folds of the first. Young Siobhan defies her father (also Stephen McClure) and follows a stag (also Gabriel Howard) into the forest, stumbling on a royal faery court (also Therin Miller, Sandra Howard and Michael Dwiggens). They decide to keep Siobhan as their captive, but they have no magic that can outlast a strong father-daughter bond.

Director Gwen Kelly-Masterton weaves together two scant stories, perhaps to distract from the threadbare simplicity of each tale. The concept does less to wed the stories and serves only to stall each scene, just as the action picks up, so that the actors can swap coats in the dark and lose precious forward momentum. It’s almost like encountering a cliffhanger every eight minutes, followed by a long wait for the team to painstakingly recreate where they were eight minutes before.

Therin Miller and Gaby Fernandez manage to stand out amidst coat swaps to step in as each other’s protagonist or antagonist, whenever needed. However, with each story so meticulously segmented, it’s easy for even strong performers to feel more like a place setting than a real person with a goal. The only thing that could salvage “The Land of Never-Lack” from this faery curse- I mean, from script troubles this far-gone, is a concerted effort towards effective storytelling.