Over the years, I’ve come to expect good things from Porchlight Music Theatre, and “Dreamgirls” certainly kept up with my expectations.  The musical, which has had success on both stage and screen, is a high energy tour through the lives of a fictitious 1960s girl group akin to the Supremes.  The group goes through the highs and lows that come with fame and fortune.

The entire cast, headed by Donica Lynn, Candace C. Edwards, and Katherine Thomas as the titular group, is splendid.  The musicianship is universally high quality, and Brenda Didier’s staging moves with an effortless energy that carries the action along just shy of break-neck pace.  Were everything a step slower, it wouldn’t click.  Were it all a step faster, everything would blur together.  What Porchlight has accomplished here is nigh on perfect.

Eric Lewis is rapidly cementing himself in my line-up of favorite Chicago performers.  I’ve reviewed him before in the Marriott’s “Seussical” and BOHO’s “Parade”.  In the role of Jimmy Early here, he continues in a pattern of charismatic, powerful characters with remarkable pipes.  While his character is largely a plot device to show the evolution of the career of the ladies, he imbues it with a pathos that resonates beyond the world of a soul singer.  Lewis’ Jimmy is one of the characters with which is it most easy to empathize. 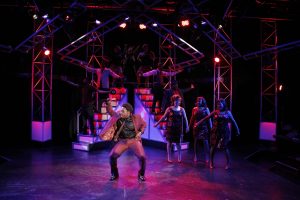 Another hero among the cast is Gilbert Domally, who plays C.C. White.  As the brother of one of the group’s singers, he is the foil to her own tumultuous voyage.  And together Domally and Lynn form the spine of this work.  We root for them to succeed, and when things go wrong, we root for them to come back together and make it all okay again.

So much of this show is carried by the three (really, four — Kyrie Courter plays a new addition to the group in the 2nd act) ladies, that I find myself wanting to point out each of the smaller roles for how well those actors did.  But, this review would be of immense length if I did that.  Suffice it to say that everyone was cast exactly right, and performed even better than expected.

If attending this show, you’ll probably want to sit in the middle section (the thrust stage has about half of its seating divided on either side of the performance space).  It is clear that some numbers were staged specifically to be seen from that angle.  But, seeing the show from the side (as I did) doesn’t diminish the experience all that much.

TEN WORD SUMMARY:  I can’t get the theme song out of my head!