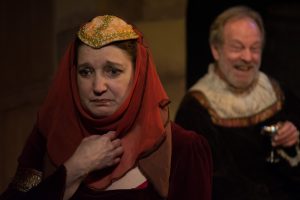 Show: The Lion in Winter

A classic play is a classic play for a reason.  The script is solid and it still speaks to us across the ages.  So it is with “Lion in Winter”.  Director Brian Pastor’s take on James Goldman’s venerable script is filled with seething passion that boils just below the surface of the very regal and hoping-to-be-regal characters’ faces.

The cast, headed by Brian Parry as King Henry and Elaine Carlson in the role of Eleanor, is made up of a group of actors whom I have come to respect through their other work around town.  So, it was a joy to see them all working together in concert to create a show so fully developed.  Parry and Carlson banter back and forth with barbs worthy of Benedick and Beatrice.  Really they surpass the Shakespearean and go to a level beyond.  These are a king and queen who are battling for control of the country, for the future of their sons, and for each others’ love.  And when it comes down to it, they’ve been at this battle long before the play started.  This is epic political warfare being waged.  There are subtleties and nuances at play here that only a skilled hand can bring to the fore, and Parry and Carlson do just that. 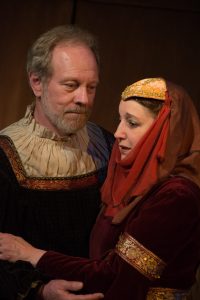 Jared Dennis as the somber Richard and Nick Lane in the role of Geoffrey are perfectly cast in their roles.  I now have an imprint in my mind as to what those two princes must have been like thanks to these two portrayals.  Only Tom Murphy’s turn as Prince John rubbed me the wrong way.  He was far more presentational than his compatriots, which made his character stick out.  I suppose that might have been an intentional choice, but whether it was or not, he distracted from the content of the scenes he was in.  I’ve enjoyed Murphy in past roles (most notably in last year’s “With Love and a Major Organ” at Strawdog), so I was disappointed that this wasn’t his strongest work.

Nevertheless, the pacing and the action of this play was perfect for the cerebrally challenging work that it is.  Politics and scheming are difficult to make engaging and personal, but the Promethean crew make the mechanations of governance and control into riveting theatre.  In addition to the acting, one thing that I’ve always found important in creating an environment for the positive reception of a difficult work is the soundscape that informs the audience’s reaction. Ben Sutherland’s sound design and original score set a perfect tone for what is happening on stage.

This is not a short show, as many scripts are these days.  It comes from a time when we would sit for longer and listen more carefully.  Because of that, I was thoroughly impressed that Pastor’s cast kept me engaged the entire time, never letting their energy fade for a moment.  This is a refreshing take on a script that many have come to know as a favorite.  Well done!