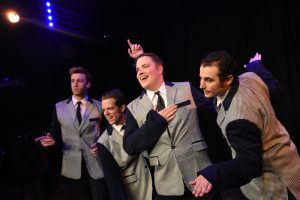 In a city where improvisational comedy can be seen in myriad venues on any given night, it’s difficult to rise above the rest.  That is especially true given the long shadows cast by iO and Second City, which are recognized giants in the field.  Yet, with each production I see as MCL Chicago, I truly believe that this little musical improv theatre is a step above what others are doing in a similar vein.

The latest offering that I was able to take in there was called “Chicago Doo-Wop Dreams”.  The show is partly scripted and partly improvised, both the script and the music… well, at least the lyrics.  The framework upon which this story is stretched is that of a 1960s a cappella quartet.  Sadly, that quartet recently lost a member, so it is now a trio searching for a new lead singer.  In the meantime, the group is called “The Three Skins”.  Well, you can guess what they’ll be called once they find a new high tenor, right?  Not necessarily.  The group’s new name is left up to the audience.  On the night that I took in the show, the audience took the bait and we witnessed the rise and fall of “The Four Skins”, but on other nights the show isn’t quite as replete with as many dick jokes (… a comment I get to make more often than I’d like about MCL shows). 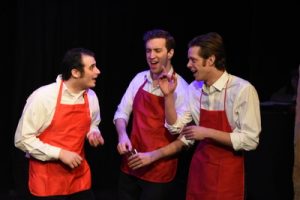 Anyway… The quartet with the unfortunate name is actually quite good.  More than quite good, really.  They blend really well, and their renditions of Doo-Wop classics such as “Run Around Sue” and “Calendar Girl” are beautifully done.  But, more notably, even many days after seeing the show, one of the original songs is still stuck in my head.  Now, I’m going to make an assumption that the song “I Love You More Than You Love Me” was written by the show’s director/musical director, Stephanie McCullough, although the show’s program and press materials don’t make that exactly clear.  Nevertheless, it’s a catchy number, a well-penned song.  And, I can’t get it out of my head!

Within the play, Nicky Sage (John Wesley Hughes) writes the song at the spur of the moment, when challenged by his new band mates to create something original.  Jimmy O’Connor (Jake Meyer) lays down a bass line, and the others (Jean Bonavita and Mark Rudy) fill in the harmonies.  A new song is created, as is the career path for this likable crew.  They break onto the scene with their single, they go on tour, Nicky goes solo, life falls apart, and they eventually com together again for an emotional reunion. 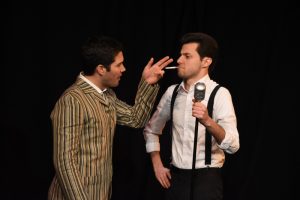 If you swap out names and genders, you have the plot of “Dreamgirls“.  And that’s part of the charm here.  The tale is familiar and reliable. The characters are ones who we know.  The one difference here is that some of the songs are being made up on the spot, and some of the dialogue wasn’t memorized beforehand.  The beautiful thing is that one generally can’t tell which parts of the show are being made up at the time of performance.  There’s a lot of improv skill on display here.

That isn’t to say that all of the improvisational work is hidden from the crowd.  One specific chunk of the show is very obviously presented as being made up on the spot.  There’s an air of excitement and risk that heightens the experience.  But, it is clear the audience is in safe hands because the show continues on an obvious trajectory without a hiccup.

In essence, “Chicago Doo-Wop Dreams” is a fun evening of musical theatre.  It is a feel-good event that leaves you smiling with a song stuck in your head… forever!