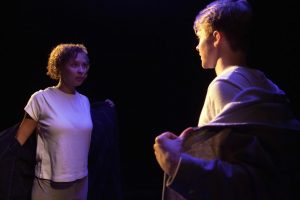 Human brain chemistry is a damn near impossible terrain to navigate, and exponentially so if your brain can’t distinguish social and emotional cues. This is where the power of a good story comes in. Take a family recently featured on an episode of the ‘RadioLab’ podcast (‘Juicervoce’): they learned how to communicate effectively with their autistic son using the things he understood best, quotes from Disney films. Or an author who praised ‘Guardians of the Galaxy’ for accidentally creating a skull-crushing alien who might also be on the autism spectrum near the author’s young brother. Moments like these help to build a vocabulary and understanding to someone who may never experience emotional highs and lows.

In the same way, characters in Johnna Adams’ ‘World Builders’ have built refuges that allow them to experience and create human feelings and relationships while also maintaining a safe, clinical distance. Adams asks what would happen if a medical breakthrough could erase that clinical distance for some lucky (or unlucky) guinea pigs. This clinical trial is a doozy of a concept though, and the story struggles with the weight of it.

In ‘World Builders’, Max (Andrew Cutler) and Whitney (Carmen Molina) are in treatment for a shared personality disorder that renders them both fixated on internal worlds of their own creation. Alone they are socially isolated, focused so much on the maintenance of their private internal retreats that they may be a danger to themselves, but they’re brought together for an experimental treatment designed to quell their internal worlds until they fade away. 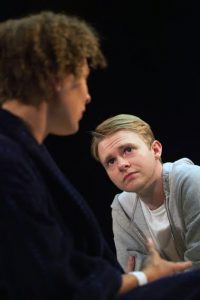 The expectation is then that Max and Whitney would come out of isolation, but they seek each other out with great trepidation of that looming unknown. What will replace the internal worlds they’ve devoted their lives to cultivating? Human interaction? Love? The emotions they never used to be able to process start creeping in, and Max and Whitney ping-pong against each other, hoping to assemble a new refuge to replace the disappearing ones they’ve always gone to.

Carmen Molina is brimming with fantastic nervous energy as Whitney, who is compelled to talk through every aspect of her multifaceted internal landscape, as the voluminous society of futuristic characters she supports start disappearing as a result of the drug. Her inner society gives her one thing she relies on: immediate do-overs and re-workings until things come out perfectly. As Max, Whitney’s reserved opposite, Andrew Cutler is quietly mesmerizing. His world is not sprawling, but it does threaten to consume him. He is withdrawn, and has learned to hide the things that scare away everyone close to him. But when he shares his secrets, they are wrenching.

Their proximity allows them to dip their toes into choppy new emotional waters as strange new feelings begin to ‘show up like warts’. The more the pills take effect, the less clinical their language and demeanor becomes. Director Jesse Roth doesn’t overstate a thing, choosing to hand his performers a sparse canvas to paint their lives on. Their inner worlds should steal focus.

There’s just one variable that prevents us from getting totally immersed: ‘World Builders’ has a tendency to over-explain its premise and its people, and not trust us with the concept of a medical breakthrough pill or its test subjects. As a result, Whitney and Max speak in place of their unseen doctors and loved ones, treading a thin line between frightened souls and vessels for exposition. With a lighter hand, author Johnna Adams and First Floor Theatre could really be on to something.