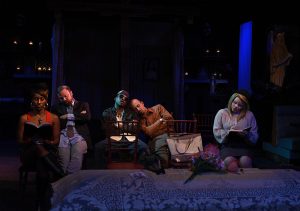 Show: Our Lady of 121st Street

Open the chapel doors on Eclipse Theatre’s production of Stephen Adly Guirgis’ 2003 play “Our Lady of 121st Street”, and you’ll encounter all the makings of a curbside memorial for an icon: saint candles, photos, toys and trinkets stuffed into every crevice. Director Sarah Moeller has created a gorgeous landscape and assembled a winning cast that fill in nearly all the blanks left by the author in this love story to Catholic Harlem.

A funeral is taking place for Sister Rose, once a mainstay in the lives of a generation of Catholic schoolchildren, now missing from her casket. Balthasar (Todd Garcia), a cop and former student, leads the investigation into the missing body as far-flung and close-knit mourners reunite. Flip (Gregory Geffrard), living a new life with Gail (Matt Thinnes), has his feet planted firmly in the closet, and insists on masculine bravado with his old friends, despite Gail and others providing him room to be open about his sexuality. Edwin (Anthony Apodaca) struggles alone to care for his mentally disabled younger brother Pinky (Rudy Galvan), that is until her meets Marcia (Kristen Johnson), who could be a kindred spirit or a another unstable dependent. Inez (Celeste M. Cooper) and Norca (Paloma Nozicka) are gorgeous women, aging out of sexpot status, and determining how much they really want to cling to pride and vindictiveness for indiscretions they’ve visited upon each other. Rooftop (Bernard Gilbert) is the neighborhood success story, but wracked with guilt for the trouble he’s caused and the people he’s wronged. He seeks absolution form Father Lux (Gary Simmers), a war veteran priest whose own faith has dwindled to nothing. 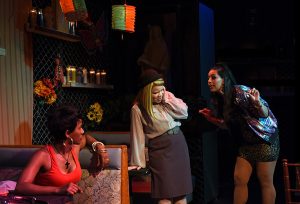 If that sounds like a lot of characters to follow, it is. If it also sounds like a lot of stories to resolve in a little more than 2 hours, it is, but author Stephen Adly Guirgis isn’t too concerned with how everyone makes it out of this Harlem funeral. Some exchanges feel like social experiments (“I wonder what a well-to-do white woman, working class Latino man and a gay Wisconsin actor would say to each other if they had to share a restaurant table?”), other exchanges can feel like thin platforms for characters with pent up emotions, in need of a monologue audience, I mean, uh… confessional booth. But despite some problems with the framework, these are important stories and viewpoints with a ridiculously talented cast to deliver them.

Among the characters we get to see go through turmoil and change, Bernard Gilbert stands out as Rooftop, a sweet-talking braggart who can talk circles around the heart of a problem before being forced into a landing pattern. Gary Simmers is his perfect counterpart as Father Lux, who is thwarted at every turn from getting Rooftop’s confession, but develops an obsession that triggers his log dormant compassion. Celeste M. Cooper as Inez and Gregory Geffrard as Flip are fantastic as two people who rarely intersect, but who are both greatly invested in keeping others in the dark about their deep wells of pain and fear. Finally, as Balthasar, Todd Garcia serves not only as a solid cable between intertwined stories, but as a reluctant authority and weary expert in the horrors that Harlem can visit upon unsuspecting people. He is both the reminder and relief from the cold fact that somewhere, something nefarious is happening to what remains of Sister Rose.

Director Sarah Moeller has assembled a powerhouse cast and design team for a beautifully gritty rendition of “Our Lady of 121st Street”.  Scenic Designer Kevin Hagen is particular has created a truly original space that encompasses run down churches, dingy dive bars, and graffiti covered back alleys in a single amorphous spot. A pair of red sneakers you might find slung on telephone wire are dangled instead from church rafters. It is disturbing, it is unsavory, but it is also holy, and for nearly everyone onstage, it is home.