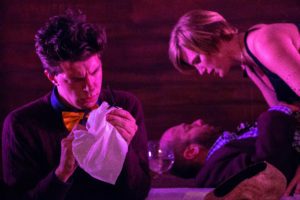 Red Theatre’s production of Celine Song’s “The Feast” is an interesting choice of play for a company known for producing free theater for all. I can see exactly what makes it so enticing: It’s likely to attract absurd theater enthusiasts, it has the pedigree of being a Chicago premiere, and it shares a communist disdain for the bourgeois. But the show is a slog with very little to reward a hungry audience besides an interesting stage tableau (lots of credit to designer Mike Mroch).

In “The Feast” Wendy Darling (Alejandra Vivanco) is having old friends Sam (Shelby Garrett), Rhett (Carl Wisniewski), and her brother-in-law Xander (Henry Greenberg) over for an opulent dinner. They are waiting on Francis (Ricky Quintana), Wendy’s husband, an incredibly attractive neurosurgeon, who is running late. That said, you’re better off not taking this play or its characters at their word. The reality they occupy is slippery, like a dream, a farce, or a disgruntled toddlers’ game of dress up. I think the minds behind “The Feast” want us to liken it to Brecht or Beckett, but it’s missing a profound notion to keep the engines humming. The only important things to remember are 1) in this world meat is unfit to eat and everyone is a forced vegetarian, and 2) no one wants to lift their forks until delicious, delicious Francis arrives. 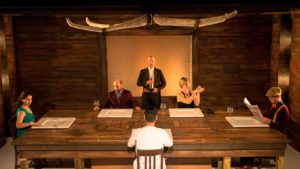 Director Gage Wallace has tasked the actors with discovering and embracing heightened weirdness. They counter storybook whimsy with textbook jargon and whatever meaningless mouth music that fills the space between our ears. I can scarcely imagine what motivates each moment. Maybe questions, like: If your extreme boredom were a song, what would it sound like? Could you fill the void between your massive place settings and have sex on the table without ever touching? As a result no character is particularly compelling, but being compelling is hardly the point. In fact, it’s probably easier for everyone if I award accolades for duties deftly performed. Here they are, in no particular order:

Best human portrayal of a phone, including dialing, ringing, operator, and hold music: Pavi Proczko as the mostly silent Butler.

Best performance of a song consisting of only the word ‘tolerant’: Henry Greenberg as science-minded Xander.

Best application of lipstick to entire face to obtain the youth and vigor of seventeen-year-olds:

Carl Wisniewski and Shelby Garrett as the equally repugnant Rhett and Sam.

Best admission of deep thoughts had while sitting on the toilet: Alejandra Vivanco as our hostess, Wendy.

Best delivery of a line that accidentally describes the experience of watching “The Feast” (“It’s like were not interested in holding it together.”): Ricky Quintana as a quickly devoured Francis.

Brother-in-law Xander assesses “The Feast” with more accuracy than I could possibly drum up when he says, “Calling this a good time would be inaccurate.” He’s right. It’s an endurance test that circles around quite a few potential central ideas. Is this a diatribe against a culture of over consumption? Could be. Is it a mockery of privilege and white fragility? Sure, why not. Is it awarding humanity a failing grade for our deep apathy? Signs point to yes. But, is “The Feast” a recommendable entertainment? It didn’t leave me particularly enriched by the power of good art.  But your response may differ, depending on your affinity for pointedly unhinged and unstructured theater.

TEN WORD SUMMARY: Your enjoyment of this dinner party’ll depend on your taste.