As the lights went down on the first act of “The Sundial”, the woman behind me was speaking to whomever came to the show with her.  She said, “I’m really glad I read this book before we came.  I’m not sure I would understand what’s going on if I hadn’t.”  Sadly, I hadn’t read Shirley Jackson’s book prior to attending the performance.  Any adaptation that requires extensive knowledge of the source material to fill in the gaps left in the script is not a good adaptation.  I was a huge fan of director Paul Edwards’ previous adaptation of Jackson’s “The Haunting of Hill House”.  I cannot say that I am a fan of this current production, however.

What was missing from this production, that permeated the earlier one, is a sense that you can tell what the characters are thinking. Motivation is often lacking in the decisions made by these characters.  At least, it isn’t at all clear.  Much of this presentation seems more like an absurdist play akin to “Ubu Roi”, rather than a suspense-filled thriller that influenced the works of Stephen King, among others.  Events happen in an established order.  That’s the closest this show comes to having an actual plot.

Here’s the nitty-gritty:  Leo has died.  This only matters in the fact that he is in line to inherit the manor house in which the play is set.  We never meet him.  We do, however, meet his widow, his daughter, his mother, his father, and the servants and others who reside in the house.  As the lights rise on the scene, the play initially seems to be about an angry pre-teen (Lauren Mangum) who claims that her grandmother has killed her father.  The grandmother (Sheila Willis) is a youthful and comely woman who takes care of her ailing husband (Kingsley Day) while having a blatantly public affair with Essex (John Blick) who is in residence as the family archivist.  With Leo out of the way, Orianna (the grandmother) has become her husband’s lone heir.  And she’s kicking everyone out of the house who has lived there prior to the funeral, including her man-thing, Essex. 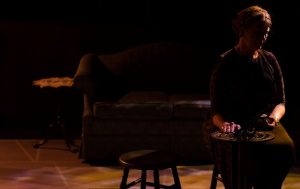 That all sounds like a great set up for a dramatic family intrigue.  Murder, suspense, wickedness and spiteful revenge.  But, that’s not what we get.  Instead, there is suddenly a whole bunch of poorly explained supernatural crap that interrupts what could have been an otherwise intriguing peace.  The issue of whether or not Orianna killed her son to get the house is quickly forgotten and instead we watch a frantically obsessed household prepare for the end of the world by essentially becoming the early-1960s version of preppers.

Why does this happen?  Well, apparently because Aunt Fanny (Morgan McCabe) has seen a vision of her father (who is also the father of Orianna’s terminally ill husband).  Fanny’s vision predicts the end of the world, followed by paradise on earth.  Now, why an entirely large household buys into this vision isn’t very clear.  There are two instances that may serve as arguments for the vision’s validity, but no character is a skeptic, no character explains why they are swayed to believe that what the old lady is saying is true.  Everyone just jumps on the bandwagon and fully embraces a massive lifestyle change that involves never leaving the house and believing that they are the ones chosen to survive the apocalypse.

The previous three paragraphs explaining what was happening are only possible for me to write because I looked up the book’s information and summary on Wikipedia.  In truth, I spent most of the first act horribly thrown off by the disjointed storytelling and the fact that it was difficult to tell who was talking about whom and why.

In the second act some things became more clear, although a small subplot about one of the house’s guests trying to leave muddies things a bit.  Nevertheless, the script improves in the 2nd act.  The characters are also better defined.  The show never rises to the level of brilliant, but it’s easier to follow after the break.

I am frustrated in writing this review, as I wanted to like the show.  I really wanted to like it, largely because of how much I enjoyed the previous effort by the same adapter of the same author’s work.  There were some great performances.  Kingsley Day’s performance as the wheelchair-bound invalid, Richard, was great.  As was his turn as Miss Inverness, a shop keeper from the town nearby.  Each time Day came on stage, the show improved exponentially.  John Blick’s turn as Essex was intriguing.  At moments he was despicable, at others he was the easiest to empathize with.  Blick gave dynamism to what he was able to dig out of the script.

TEN WORD SUMMARY: What’s going on? Why are they doing that? Good Question.