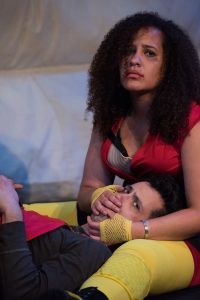 Organic Theater Company and adaptor/director Alexander Gelman have entered the arena of absurd farce with Alfred Jarry’s “King Ubu”, the tale of a would-be Macbeth brought low by cruelty and incompetence. They’re hoping that we’ve also got an appetite for a good send up of one of the most deluded modern men to hold public office in the United States (I don’t have to give him the satisfaction of printing his name, do I? Good).

The problem may be fatigue, it may be toothless parody, or it may be the sour taste of our most unattainable revenge fantasies playing out in front of us as the title couple is besieged and run out of creation on a rickety boat. Whatever it was, something about obnoxious King Ubu’s short, bloody reign doesn’t quite land with the punch it needs. 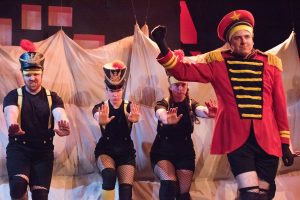 In “King Ubu” Ma and Pa Ubu (Alys Dickerson and Joel Moses) see an easy path to ultimate power over the country of Foland laid out in front of them. They just have to murder benevolent King Wenceslas (Adam Zaininger), his queen (Matthew Romriell), his son Beaujolais (Kearstyn Keller), who- oh, darn, the little bugger got away. No matter! They still have all the power of Colonel Baseboard (Colin Jackson) behind them, and all the land and gold they can force from the hands of their increasingly angry subjects. While devoid of charisma, wisdom or any understanding of how their country functions, Ma and Pa Ubu are overflowing with cruelty to make up for it. The royal couple soon discover that when loyalty no longer holds sway, their subjects are only too glad to wage war with them.

What “Ubu” has going for it is a fountain of ingenuity and a wildly dexterous cast, with Joel Moses, able to clear Ubu’s way forward with the power of noxious gas, sallow eyes and a mighty prosthetic belly. Alys Dickerson steps in as Ma Ubu, the brains of the outfit, and conniver in chief. Other ensemble notables are Kearstyn Keller as Beaujolais, really selling her swordsmanship (I should mention: there are no swords, all deaths are administered by a children’s hand-slapping game) and Adam Zaininger, who’d take home a statue if there were a Jeff award for sexiest horse.

Where the show falters is is in it’s mild flirtation with sending up our current president. Every chance he gets, Ubu will insert a hashtag-ready rejoinder proclaiming his leadership style the be big league, or insisting “I have a good brain, believe me.” It’s meant to garner laughs, and the comparison is apt enough, but thanks to the complete saturation of White House dealings, a once laughable man has drained us all of good will. However, if  there were anything adaptor Alexander Gelman could do to silence the ever-yammering presidential maw, I’d line up for a ticket, pronto.

TEN WORD SUMMARY: Some despots need to be skewered on a sharper stick.