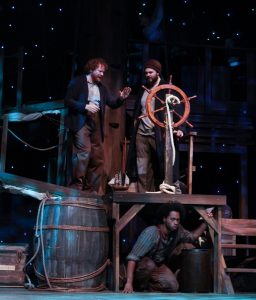 Show:  Peter and the Starcatcher

I discovered the novel “Peter and the Starcatchers” by Dave Barry and Ridley Pearson back in 2011 at a Half Price Bookstore.  It was an impulse buy.  I loved it, and I subsequently plowed through the rest of the series that serves as a set of prequels to the story of Peter Pan as we all know it.  So, when given the chance to review the musical (or, rather “play with music”) based on the novel, I was excited to say the least.  After seeing the production currently running at Metropolis Performing Arts Center, I am less excited; mostly disappointed.

For any fan of a piece of literature there is an inherent risk in attending an adaptation of that piece, whether film or play, television program or comic book.  The act of adaptation is an act of creation, and that means that there resulting piece is a completely separate work than the original.  And, yet, it is difficult to separate the parts in one’s mind, and emotional reactions to the newer work are often based upon one’s impressions from the first work. 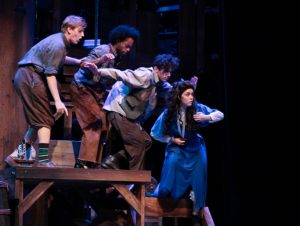 I don’t really want to discuss the merits or techniques of adapting a work to the stage, but I mention the above thoughts because while I love the original book (and the following books in the series), I will try to evaluate this show on its own merits.  Were I to merely compare one side-by-side, I would find Rick Elice’s script lacking, and a bit of an affront to the source material.  Jokes incorporated into the script are anachronistic to the play’s Victorian Era setting. And to a large degree the show seems to be written around a list of terrible jokes rather than telling a story from whence humor emerges.  Parts of the later books were incorporated into this show, which didn’t really add anything positive to the product.  But, what’s it like without taking into account the relation to the source book?

Well, this is a clunky script that depends far too heavily on direct address of the audience as the actors often take turns in the narrator’s voice expressing their own actions in third person.  Despite having a constant tone of there being too much exposition, things often happen with little or no explanation (although, fans of the books will be able to decipher some of the goings-on).  There is a feeling of spoof or parody that runs throughout the show, that cheapens its own delivery.  And then there are some songs.  Make no mistake, this is not a musical.  One cannot call a show that has almost no songs in it a musical.  There are a couple of musical numbers incorporated into the play; and stating that they are incorporated may be a bit far to go. More to the point, they are slapped on and adhered badly.

Now, while I think the script is terrible, and the play itself a mistake, I cannot say that about the production.  Director Lili-Anne Brown puts together a well-rendered version of the show.  Her cast is uniformly strong and they pour more energy into the performance than I’ve seen done in some while.  The live Foley sound effects provided by the pit orchestra add a lot to the show, as does the cleverly realized costume design that allows for a lot of role-doubling.  The scenic design of Ashley Woods impresses upon first sight, and captures the spirit of the scenes both on-board ships and on Mollusk Island.

But, when it comes down to it, no matter how good the performances of the actors, or the beauty of the set, the show barely rises to the level of entertainment that can be had by lounging on the couch at home on standard network TV.