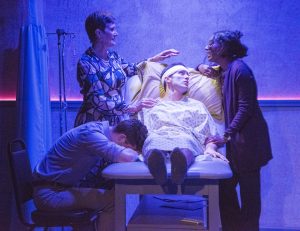 There is a metronome working overtime deep in the heart of Theo Ubique’s “A New Brain”, that keeps things so precise and expert, it’s almost like were in a operating theater, being tutored by a flock of luminaries. Playing space be damned, the cast and creative team bring this performance close enough to incorporate the whole audience into it. The players are bounding up and down your aisles, directing their lyrics sometimes solely to you, if you’re in the right place and the mood strikes them. Hell, if you ordered a beer, look again; the man who brought you your pint and glass a moment ago has now hoisted a small canvas sail, and sings aloofly to his one true love, a sailboat. The confidence and dexterity of a cast has never come together so well, and it’s worth more than all the spectacular effects money could buy.

In William Finn and James Lapine’s “A New Brain”, Gordon (Chase Heinemann) a children’s television show composer collapses during a lunch date with agent and friend, Rhoda (Tyler Symone). He discovers he has an arteriovenous malformation in his brain, and no choice but to undergo a life-threatening surgery to correct it. Gordon has a lot to sort out before he goes under the knife; his rocky relationship with sailing-obsessed Roger (Colin Schreier), the overprotectiveness of his mother, Mimi (Liz Norton),  his own doubts, brought to life by amphibian children’s show personality Mr. Bungee (Andy Brown), even a tenacious homeless woman looking for change (Veronica Garza). Last but not least, there’s the team of doctors and nurses who treat him (Kyle Ryan, Tommy Bullington, Holly Atwood and Danny Dwaine Wells II), bringing levity, cheer and vocal power during ensemble numbers.

The music reflects the crisis and return of Gordon’s particularly stream-of-consciousness brain. His messy life and lyrics are less disjointed when stung together with music director Jeremy Ramey’s gorgeous musical accompaniment. Likewise, choreographer Cameron Turner can turn a somber room into a mad-cap explosion of synapses firing. There’s just enough space to play tug-of-war with a Gertrude Stein book, or a rousing game of spin-the-gurney, so of course, we must. 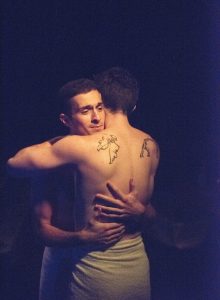 Director Fred Anzevino has assembled a collection of dynamic performers with astounding voices. Liz Norton stands out as Mimi, wringing the pathos out of her imagined 11 o’clock soliloquy, “The Music Still Plays On”, and Veronica Garza spares us no contempt with Lisa the Homeless Lady’s bitter plea for “Change”. Chase Heinemann may shoulder the heaviest load as as Gordon, but is so nimble in every number, he makes it look easy. And while every performer is fantastic on their own, the ensemble is an unstoppable force. Numbers like ‘Heart & Music’ and  reprise ‘Time & Music’ are so layered and enveloping you’ll find yourself floating above the rafters if you let go of the ride handrails. Don’t waste any energy fretting over how much you’ll enjoy the style or the subject matter or of this incredibly smart production, just go and experience this masterpiece first hand.