Show: Chicago’s Theater Community Coming Together to Fight the Ism’s 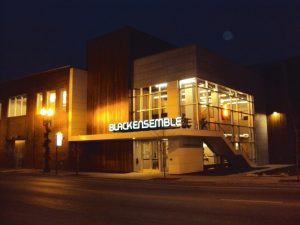 Backed by Black Ensemble company members and a small but mighty house band, our host for the evening, Black Ensemble Founder and CEO Jackie Taylor, invited Chicagoans of all stripes onto her own sacred ground to do some healing. Crafted by a growing collection of theater companies that are owned and operated by women and people of color, “Chicago’s Theater Community Coming Together to Fight the Ism’s” came to life, and went immediately to battle against always present enemies: a tradition of exclusion, and a culture of silence.

The evening of theater and performance brought together voices from Teatro Vista, About Face Theatre, Black Ensemble Theater, Her Story Theatre, Firebrand Theatre, A-Squared Theatre, and several speakers from a very short list of black corporate executives. Just as much as this was an evening of underrepresented stories taking focus, it was a primer for a large audience of white supporters on the myriad ways we can show more support and be more aware of our own biases.

Black Ensemble company members regaled the collected crowd with original songs like “Four Hundred and Sixty Five Years” and “I Can’t Give Up Now”, that highlighted healing racial divides. Her Story Theatre implored us to start seeing the signs of sex trafficking and modern day slavery with “Money Make‘m $mile”, and Firebrand Theatre (a company devoted to musicals penned by women) shamed golden era musicals with “The Sexist Medley”.  About Face Theatre threw the glammest dance party ever to combat homophobia and gender/binary exclusion with their piece “Looking Out, Looking In”. And the sharpest skewers were saved for A-Squared Theatre and Teatro Vista, each of whom took great umbrage with normalized racial insensitivity for Asian and Latin cultures by lambasting micro-aggressions in sketches.

The most interesting viewpoints for me were from Angelique Powers , the Co-Founder of Enrich, and President of the Field Foundation, and Tyronne Stoudemire, Vice President of Global Diversity and Inclusion for the Hyatt Corporation. Powers spoke about the pitfalls and importance of arranging events targeted at addressing workplace racism, even though we all are ill-equipped to hold a healthy discussion on race. Stoudemire reminded us of some of the fallacies that prevent diversity efforts from taking hold, and the stigma that accompanies his work (“want to put your staffers to sleep? Invite them to a diversity seminar”). Inclusion at all levels, listening,  and understanding are the only way to let others into primarily white male institutions. This process takes constant work, and there is no easy resolution or quota to achieve,  but the result can mean that stories that may have once been dismissed will be heralded on the stage and everywhere else.

TEN WORD SUMMARY: Putting the work of artists of color and women first.