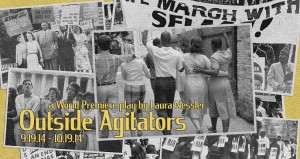 This is the perfect time for a play such as 20% Theatre’s “Outside Agitators” to emerge onto Chicago’s theater landscape. It joins a dialog already in progress at a moment when tensions are still burning hot in response to systematic abuses and wrongful deaths in Ferguson, MO. Like the uncertain protagonist of “Outside Agitators”, Ava, millions of onlookers contemplate their TV screens, propelled to be more than observers of their country’s unrest, just unsure on how to go about it.

Taking place almost 50 years ago during the 1965 voting rights marches in Selma, AL, “Outside Agitators” casts an eerily similar reflection of modern social upheaval. Seasoned voting rights activist Randall Armstrong (an antsy and maligned leader as played by Aaron Mays) and fresh recruit Leroy Moton (Eric Gerard as a sometimes devoted, sometimes evasive young man) prepare to organize hundreds of marchers to face Selma authorities. They are nursing fresh wounds administered by police batons and the death of fellow marcher, Jimmy Lee Jackson, at the hands of the police has everyone on edge. Meanwhile, two white, middle class mothers far from the turmoil- the adept and knowledgeable Viola Liuzzon (a real champion of voting rights played with bluster by Eva Laporte) and rudderless Ava Mathis (Kristi Forsch, an unrepentant whirlwind)- each dodge their skeptical families and venture to Selma to support and march in solidarity with primarily black activists.

It is here where the production’s conceits begin to unravel, and what could have been insightful storytelling takes a backseat to history, exposition and the mechanics of bringing these unlikely parties together. Author Laura Nessler and director Amy C. Buckler assemble a cast of characters without an ounce of shame, secretiveness or subtext. The characters have no problem unloading their fears and desires on anyone who asks, which gives the impression that nothing is very deeply felt among the activists. Long held prejudices disappear and slights are forgiven not after trust is earned, but whenever it’s convenient. Precautions are followed religiously to ward off the unseen menace of police and incensed whites, but forgotten instantly when the characters could use a violent wake-up-call.

It’s hard to hold out hope for central character Ava, who joins the march impulsively, and struggles to pin-point why even after the marches are over. After arriving and announcing that she has nothing to contribute to the cause, we want her to emerge with her spine a little more developed. Instead we watch her soak up limited resources, endanger her friends, and disappear back home at everyone’s behest. Without much prompting, Leroy’s distraught mother Jessie (Shariba Rivers) admits the hardship that frozen dinner production has dealt her family to Ava. However, Ava returns home to heat up aluminum trays without so much as a flicker of acknowledgement. Maybe her presence is intended as a poignant finger point at the silent majority who forget unrest instantly. It’s hard to say.

TEN WORD SUMMARY: Rebel meets cause, but she doesn’t have much to contribute.