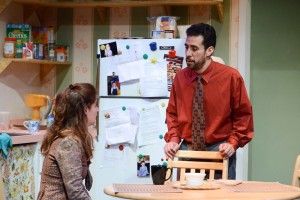 Show: At the Center

The Agency Theater Collective’s world premiere play, “At the Center”, delves into the aftermath of a wrongful conviction and the hardship that comes once the prison gates have swung open, and a man who has proclaimed his innocence for years is abruptly granted it. We follow Hector Reyes (Armando Reyes) just as his 19 year prison sentence is being overturned, and Elizabeth Harvey (Sommer Austin) the victim of the brutal assault for which Hector has served time. Elizabeth and Hector are advised by their various legal entities to exercise patience, as a bureaucratic flip of the coin could offer Hector his freedom, and dismantle the fragile walls that Elizabeth and her small family have built since her original decision to point her finger at an innocent man. If Elizabeth is wrong, she has implications to face for all of the time she spent actively despising a man who only wished to spare her harm and scrutiny as a girl.

The unexpected strain that comes when Hector is given his freedom, or the mania that plagues Elizabeth when she must recount the story she’s repressed for years to her own daughter are the play’s great strengths. From Hector’s initial interrogation, to the prison rituals he maintains as he trades his cell for an eerily similar unadorned bedroom, Armando Reyes’ slipping grasp on his anger and patience is powerful. Likewise, Sommer Austin’s Elizabeth letting go of a prickly façade she’s kept for her daughter’s (Nicole Magerko) sake provides “At the Center” with a breath of relief strong enough to make tensions vanish for a time.

Where author-directors Andrew Gallant and Tim Touhy have allowed their creation to falter, however, is in service of the real-life institution that was the inspiration of their story, the Center on Wrongful Convictions on Northwestern University. A pair of attorneys and three industrious law students are not fully formed characters, but handy vessels for exposition, wrongful-conviction related statistics and cheerful anecdotes. How apt is it that Center attorney, Bill (James Munson) gathers his colleagues to recount a tale from his younger days as a reporter that just so happens to sum up this productions’ theme (“When a crime is committed in a community, a wound appears. A hole at the center.”)? A bit too apt. Time spent at the Center is time spent away from Hector and Elizabeth, the motors of this particular story.

“At the Center” is a commendable work, but a work still in progress. It hits all the beats of a modern stage drama, and is designed and performed with zeal by terrific artists, but there is still work to be done to bring two story halves into a cohesive whole.