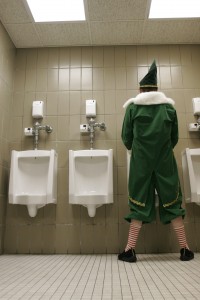 In “Santaland Diaries”, one woefully unemployed man, whose dreams of instant soap opera fame have not panned out, descends into a holiday hell-scape for our amusement and education. He is Mitchell, and he is keenly aware of everything around him; those hapless audience members who have assumed erroneously that original author David Sedaris will be taking the stool for the evening (fat chance), the parents who brought their tweens for wholesome fun (more swears and sexual innuendo averaged here than say, Dickens), and late comers entering quietly are treated to speedy re-caps and pestered for their marital status. He sees you when you’re drinking, he hears your cell phone ring, he knows when you’re uncomfortable- he’s a whole cast of ornery Santas, elves and shoppers in one candy-striped package.

Actor Mitchell Fain is a masterful emcee, putting a bead on his captive audience as he pauses boastfully to land laser-accurate zingers or winces at the unfortunate window he has opened into his own embarrassment. The performer has swallowed his pride for a paycheck, and is hired, trained and outfitted to appear as ‘Crumpet’, one elf among an elven herd leading families through the decadent holiday forest of Macy’s Santaland. Providing us a glimpse down a dark seasonal corridor and his Thanksgiving-to-NewYear’s descent into madness. Screaming, vomit, profanities, racism, lies, alcohol and menstrual blood lubricate the wheels of Mitchell’s demented story (“Santa is an anagram for Satan,” he assures us).

Crumpet and his magical clan grit their teeth and brace for legions of blank faced children all of whom are buttered up for Santa’s lap with phony Christmas joy. “You’re Santa’s favorite person in the tri-county area,” Fain assures them. However, despite his best efforts, the full-time elf walks away with a sense of timeless introspection, contemplating how many living rooms boast his photo. And he’s not too jaded to be taken by a mysterious 11th-hour Santa who instantly calms crowds and elves who are tired, cranky, broken, and ready to brawl.

Though he is literally alone on stage, he is never truly alone; his comrades in curled-toed shoes join him, as do rotating santas and particularly despicable Santaland visitors. Mitchell conjures up the cast with little more than changes in posture and tone. It’s easy to see why Theatre Wit has returned to this charming standby for 11 years running. Even more impressive is the newness that Fain and director Jeremy Wechsler imbue into a story that is now over two decades old. Ah, commercial holiday traditions *raises glass* how little you’ve changed.

TEN WORD SUMMARY:  Torture, abuse, and insanity, all in the name of Santa.